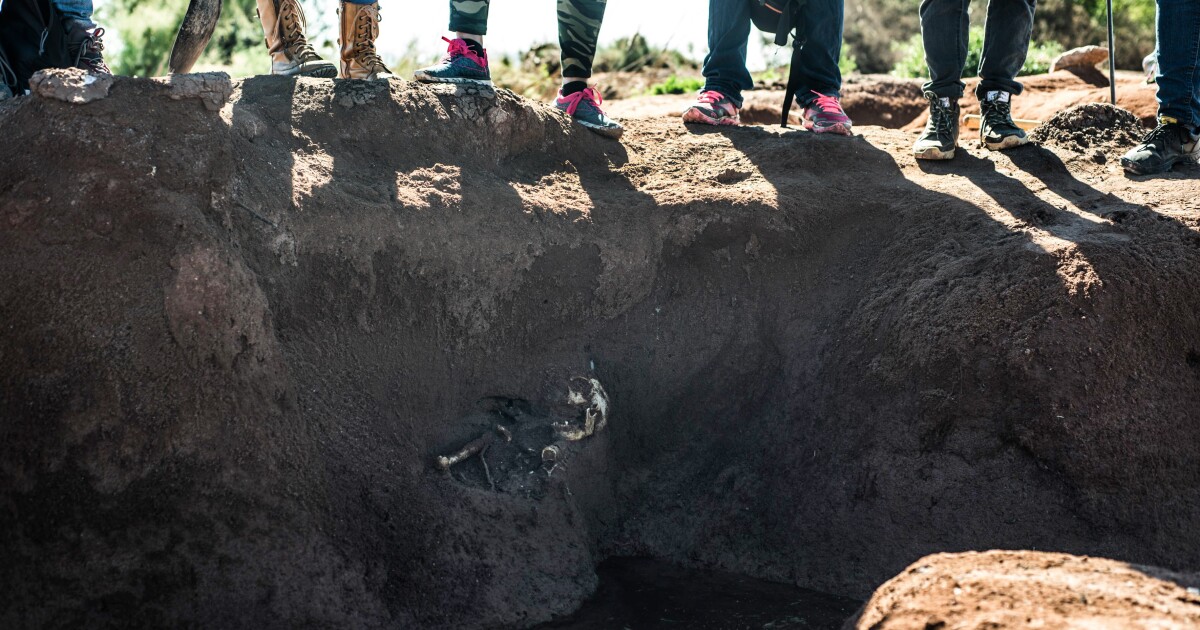 The recipe Mirna Medina Quiñónez named in honor of her dead son guides you through the preparation of a braised beef and shredded cheese quesadilla, paired with a light salad, chunky salsa and refried beans.

The dish, called Pizzadillas for Roberto, appears in a new cookbook created to raise money for women in search of their missing relatives in Mexico — those known as desaparecidos,.

“It’s very simple, but it was my son’s favorite meal,” Medina Quiñónez said recently. “He called them ‘pizzadillas’ because I’d use two tortillas, instead of just folding one in half. Then, my son would cut it into four pieces, just like pizza slices.”

Medina Quiñónez, whose 21-year-old son Roberto Corrales Medina disappeared in the northwestern state of Sinaloa in 2014, is a retired schoolteacher and founder of Las Rastreadoras del Fuerte.

The group, made up of about 130 mothers, is one of dozens of collectives that have sprung up across the country, where more than 73,000 people have disappeared in a decades-long cycle of violence and impunity waged by drug traffickers, corrupt public officials and members of the military and police.

The group in the city of El Fuerte got its name, a play on the Spanish verb rastrear, to track, from investigative reporter and editor Javier Valdez Cárdenas. He was fatally shot by assailants in Sinaloa in 2017.

The women’s efforts can get costly, with collectives trying to cover expenses like rent for office space and internet access to maintain their databases. Money for gasoline is especially important, as it’s needed to get to and from the mountains or countrysides where they search for the remains of the missing.

The office space, she said, serves as a key location for the rastreadoras, who also accompany one another when meeting with authorities. Sometimes they manage to secure financial support from the state government. Last year, they received three subsidies, each worth about $180 dollars (4,000 pesos). So far this year, Medina Quiñónez said, they have received no assistance.

In hopes of generating a more steady cash flow, the mothers began selling the cookbook this summer, a compendium of 30 recipes, all dedicated to a missing loved one. The book, titled “Recetario para la memoria,” can be purchased on their website for about $22.

In honor of her 23-year-old daughter Marian, who also disappeared in Sinaloa in 2014, Miriam Violeta Maldonado Valdez contributed Ceviche for Marian, a recipe that calls for lots of Serrano peppers and salsa huichol, a hot sauce that’s popular in the area.

“I’d been searching and searching for her when I joined the rastreadoras,” said Maldonado Valdez, who became a part of the group that same year. “And I found my daughter the very day I joined them. They were digging when I recognized her shirt. ‘She’s mine,’ I told them.”

Clad in denim and long-sleeved shirts to ward off the looming sun’s rays, the rastreadoras gather early every Wednesday and Sunday at their tiny rented storefront in El Fuerte. The space offers scarce natural light. Posters of the women’s missing relatives — mostly adult children — cover the windows.

Inside, the women share coffee and sweet bread as they prepare for the work ahead. Their loved ones were students, workers, ordinary people, several of them say.

By 8 a.m., they’ve hopped aboard pickup trucks headed toward the search sites, machetes and shovels in tow.

While on their expeditions, most of the rastreadoras also wear white T-shirts emblazoned with photographs of their disappeared loved ones. On the back, the shirts read: “Te buscaré hasta encontrarte,” I’ll search for you until I find you. Those who’ve found their loved ones wear green T-shirts. These read: “Promesa cumplida,” Promise fulfilled.

In 2017, the state attorney general notified Medina Quiñónez that her son’s bones had been found in a mass grave. Since then, she has worn green.

When photographer Zahara Gómez Lucini, who’d been documenting their work, first pitched the cookbook project to the rastreadoras in December 2018, Medina Quiñónez hesitated.

“I thought it was a very lovely idea,” she said, “but I didn’t want to reopen that wound. And then I thought, what better way is there to raise funds than through something like this? My son’s memory will be honored wherever my recipe is prepared.”

Gómez Lucini is the daughter of an Argentine journalist who fled his country during its 1976-83 military dictatorship.

As a child growing up in Spain, Gómez Lucini heard her father talking about los desaparecidos in conversations with friends who were also in exile. She’s never experienced a loss like Medina Quiñónez or the other women, but she’s worked alongside forensics teams and parents groups throughout Latin America, including Chile, Colombia, Guatemala and Mexico.

“For me, it’s important that the disappeared do not become distant, mythological figures,” Gómez Lucini said.

Her hope is that the book — which has the support of Mexican culinary giants like Enrique Olvera and Eduardo García, a former migrant worker who picked vegetables as a child in the United States before being deported — will “connect people with different realities.”

“Maybe through something so simple as a meal, those who haven’t lost a loved one in such a terrible way can consider the pain of others,” she said.

Spreading awareness about what it’s like to have a loved one go missing matters to the rastreadoras.

“When families file their reports with authorities, they’re often asked: ‘Well, what was he doing?’ But they say it as if wanting to say, ‘Well, they must’ve taken him for a reason,’” Medina Quiñónez said. “And it’s not just the authorities. Sometimes the first thing friends, neighbors and even family members think to ask is if your child was a drug dealer or a hit man.”

Delfina Herrera Ruiz’s recipe, “Shrimp ceviche for Luis,” is slightly less spicy than pizzadillas. It’s dedicated to her brother Luis Reynaldo Herrera Ruiz, who was 50 when he went missing in the city of Los Mochis. Before deciding to participate in the cookbook project, she hadn’t prepared the meal since his disappearance in 2016.

“There are people who call us crazy,” Herrera Ruiz said. “And maybe we are, but it’s because of the pain.”

She still uses the present tense when talking about Luis Reynaldo. “He likes for the shrimp and the vegetables to be very finely chopped,” she said.

In mid-July, Mexico’s Interior Ministry announced that 73,201 people have been reported missing since 1964, the year the federal government began keeping track. More than 90% of these cases occurred after former President Felipe Calderón launched a militarized “war on drugs” in 2006.

Alejandro Encinas Rodríguez, Mexico’s undersecretary on human rights, said on the day of the announcement that there has been a decline in the number of reported missing people in 2020 compared with recent years, but he acknowledged that six of the country’s 32 states did not supply their data, resulting in criticism of the newly released national registry of disappeared people.

Since 2006, Encinas Rodríguez said, 3,978 clandestine mass graves have been discovered. The states with the most mass graves are Colima, Guerrero, Sonora, Veracruz and Sinaloa, where members of Las Rastreadoras del Fuerte do their work.

To protect themselves from scorpions and rattlesnakes, the mothers have learned to wear shoes with thick soles. Other risks, like death threats, are harder to protect against. Now they also have to worry about the COVID-19 pandemic.

Before the coronavirus spread across globe, as many as 50 women at a time would gather in the office. Now, in an effort to practice social distancing, they have substantially scaled back. No more than 15 women come together at a time. Even so, 13 of them have been infected, and three of them were hospitalized.

The infections, Medina Quiñónez said, happened while the group took a break between March and July.

“We needed time to figure things out and secure protective equipment, like masks and face shields,” she said. “I would never say something ridiculous like ‘Not even the pandemic will slow us down!’ That’s irresponsible. We’ve definitely had to make changes. We have to stay healthy so we can keep searching.”

But why keep looking if she’s already found Roberto?

“I made a commitment to the other mothers,” Medina Quiñónez said. “I will help them find their children, just like they helped me find my son. Plus, some of the women are elderly and don’t have the strength to go out there. And other mothers are simply scared.”

She took a deep breath and exhaled.

“The truth is it’s kind of like therapy for me. It helps me live,” she said. “People think it stops hurting once you find your loved one’s remains. But the pain never ends.”

Trump moves to pull US out of WHO amid pandemic

Why Are People Protesting in Hong Kong?

Biden on Assault Allegation: ‘I Wouldn’t Vote for Me if I Believed Tara Reade’