For 28 years, the workshop of the Ram Janmabhoomi Nyas at Ramghat, some two kilometers from the Lucknow-Gorakhpur highway, hummed with the sound of chisels resolutely chipping away at stones being carved for the Ram temple in Ayodhya. The shilas, as they were called, gathered dirt and moss over the years, even as the workshop itself currently functions as a makeshift police camp. However, after the Supreme Court verdict of November 2019 cleared the way for the construction of the Ram temple in Ayodhya, the place is humming again. The stones, now polished anew, are lined at the entrance of the workshop, ready to be transported to the site of the new Ram temple. The remainder of the stones will be carved at the site itself.

The Centre, on February 5 this year, constituted the 15-member Shri Ram Janmabhoomi Tirthakshetra Trust as directed by the Supreme Court verdict, thus setting the wheels in motion for the temple’s construction. On July 18 this year, the trust sent a proposal to the prime minister’s office (PMO) for the bhoomi pujan of the Ram temple. It suggested two dates, August 3 and 5 for the ceremony. The PMO chose the latter, a date that seems to have particular political significance for Prime Minister Narendra Modi. It was on this date last year that the Centre revoked Article 370, thereby withdrawing the special status of Jammu and Kashmir.

The carved stones being cleaned at the Ram Janmabhoomi Nyasworkshop. 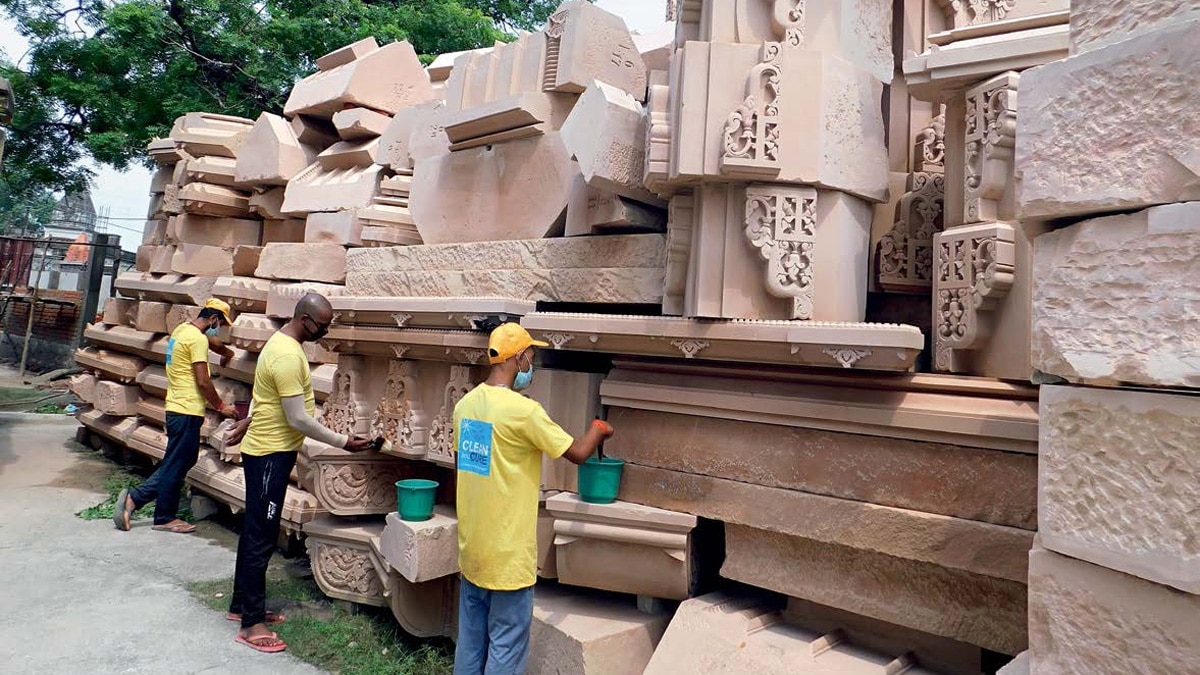 This will be the first time after the demolition of the Babri Masjid in 1992 and the building of a makeshift Ram temple in Ayodhya that a prime minister will be having a darshan of Ramlalla Virajman, the infant deity at the site.

Despite the coronavirus pandemic prohibiting any grand show, the Yogi Adityanath-led Uttar Pradesh government is determined to make the shilanyas a success. But even as the country stands poised at this ‘historic’ moment, a few questions continue to occupy the minds of observers.

For someone who was the chief charioteer of his mentor L.K. Advani’s rath yatra, the prime minister has kept a safe distance from the Ram temple issue in the past six years. Even during his two visits to the temple town, he carefully avoided a visit to the ‘disputed’ area. Towards the closing months of his first term, he even turned down the demand by his partymen to take the constitutional route to facilitate the construction of the Ram temple. This was around December 2018 when poll surveys showed the BJP getting less than 230 seats in the general election the following year. There was tremendous pressure on the prime minister by the party for legislation on the Ram temple. But the prime minister dug in his heels, saying any communal confrontation on the issue would be a deal-breaker so close to the elections.

Even when the Supreme Court delivered the judgment in favour of the construction of the Ram temple in Ayodhya, the prime minister spoke more about rashtra-nirman (nation-building) rather than temple construction, urging everyone to respect the court verdict in the spirit that it had been delivered. But there is no denying that the prime minister will be the biggest beneficiary of the project, which is slated for completion in 2024, the year the country will see the next general election. Hence, the urgency to start the construction of the temple even in the middle of a pandemic. AFTER AYODHYA, KASHI AND MATHURA?

Following the favourable Supreme Court verdict on Ayodhya, the prime minister is said to have worked hard to convince strident Sangh parivar organisations such as the Vishva Hindu Parishad (VHP) to not be overly exultant and also refrain from bringing up Kashi and Mathura, the other two flashpoints that Hindutva organisations have been fighting for.

However, will the far-right Hindutva elements so easily fall in line with the Supreme Court directive that no issue of ownership of a place of worship be raised henceforth in the country? Critics also believe that the Sangh parivar’s decision to start work for the construction of the Ram temple on August 5 is guided by political considerations, namely to deflect attention from the criticism that the BJP government is facing on several fronts, including its handling of the pandemic, the deteriorating economic situation and the Chinese incursions on the border. Denying any such intention, VHP general-secretary Milind Parande says they were guided by the 2024 deadline as their main motivation. “The coronavirus had already delayed the foundation stone-laying ceremony and was threatening to throw the whole construction schedule out of gear,” he says.

Parent body Rashtriya Swayamsevak Sangh, too, is unwilling to give up on Kashi and Mathura so easily. At an RSS meeting earlier this year, a few senior leaders raised the issue of Kashi and Mathura, saying they could allow it to slide. They even cited a 1997 speech by the late RSS chief Rajendra Singh alias Rajjju Bhaiyya, in which he said Kashi and Mathura were even more important than Ayodhya when it came to Hindutva sentiments.

However, even as the Supreme Court judgment has foreclosed the Kashi and Mathura issues, Sangh parivar sources says that the leadership is elated at how it has opened the doors for the secularism debate. They see it as a chance to push for the enactment of a Uniform Civil Code in the country. The judgment defined secularism as a basic structure of the Constitution, which the Sangh is interpreting as the beginning of a new secular construct, free of “minority appeasement”.

YOGI’S DAY IN THE SUN

For UP chief minister Yogi Adityanath, the Supreme Court verdict also brought back life full circle. His guru, the late Mahant Avaidyanath, then the peetadheshwar of Gorakshapeeth, had in 1984 formed the Shri Ram Janmabhoomi Mukti Yagya Samiti to bring pontiffs from all over the country on one platform on the issue. On December 6, 1992, Avaidyanath had also led the demolition of the Babri Masjid by the kar sevaks. Indeed, Gorakhpur, where Adityanath is the current peetadheshwar, has been a centre of the Ram Janmabhoomi movement since the 1990s. After becoming chief minister in March 2017, Adityanath has visited Ayodhya 20 times. Just a few months into his tenure, he had also rechristened Faizabad district as Ayodhya.

The chief minister has also been working overtime since the date of the bhoomi pujan was announced. On July 25, Adityanath reached Karsevakpuram in Ayodhya to take stock of the preparations. Besides meeting the officials of the Sri Ram Janmabhoomi Tirthakshetra Trust and sundry leaders of the VHP, he directed Larsen & Toubro officials (the contractors for the building of the temple) to finish levelling the 69-hectare Ram Janmabhoomi complex before shilanyas day. The CM also ordered the removal of the security watchtowers that had been a marker of the place for decades.

With the Vidhan Sabha election less than two years away in UP, the temple construction in Ayodhya will be a windfall for Yogi politically. The BJP has already started work in that direction. A nationwide party campaign beginning August 15 will have party workers holding meetings to celebrate the Ram temple and the revoking of Article 370. Dr Brijesh Kumar, associate professor in the department of sociology in Lucknow University, says, “When the UP assembly election is held in March 2022, at least 50 per cent of the construction of the Ram temple will be done. Yogi and the BJP will leave no stone unturned to put it to the public that if the government changes, the construction will be affected.”

The first step towards deciding a model for the Ram temple in Ayodhya was taken on May 27, 1992, when VHP leader Ashok Singhal signed an agreement with Ahmedabad-based architect Chandrakant Sompura. The Sompura family has built many grand temples in India and abroad, Chandrakant’s grandfather Prabha Shankar Sompura was one of the architects in the reconstruction of the Somnath temple in 1951. With Chandrakant getting on in years (he is 78), younger son Ashish is in charge of the Ayodhya project.

While there is no significant change in the design of the temple, its size has doubled (see graphic) since the meeting of the Shri Ram Janmabhoomi Tirthakshetra Trust on July 17. “The size of the temple has been increased to increase the floor area,” explains Ashish. “The increase in height and the additional floor are a part of this.” As for the cost, estimates are still being calculated. “The old design had an estimated expenditure of Rs 80 crore. But then stone was available for Rs 50 per cubic feet. Now it’s over Rs 500 per cubic feet. The cost will have to factor in all such details,” says Sompura Jr. He doesn’t expect any delays and says even the stone for “the walls of the first floor have already been cut and carved”.

The temple project brings with it plentiful bounty for Ayodhya and its adjoining areas. Ayodhya MLA Ved Prakash Gupta says “work is in progress on projects worth Rs 133 crore”. Among them is an Ayodhya bypass at a cost of Rs 40 crore, and a 165 km national highway connecting the town to Chitrakoot.

There is hope among Ayodhya’s 8,000-strong Muslim community too. Spread in areas around the Ram Janmabhoomi complex, in Begumpura, Dorahi Kuan, Ramkot and Vibhishankund, they have been living in the shadow of a security zone for over three decades now, and will be relieved if the construction of the temple creates employment opportunities. Haji Akhlaq, imam of the Shah Alamgiri mosque near the temple complex, says “the Muslim community of Ayodhya is thinking of keeping the mosque controversy aside”. About 200 Muslim families living in the Begumpura locality grow flowers. As Mohammad Akram, one of the flower-growers, says, “The Ram temple should increase the demand for flower garlands; this should benefit us.” If the project does benefit the community, they will find some closure for the turmoil of the past few decades. GOP unveils police-reform bill as Democrats move to advance theirs

Joe Biden Does Not Want to Defund the Police, Spokesman Says