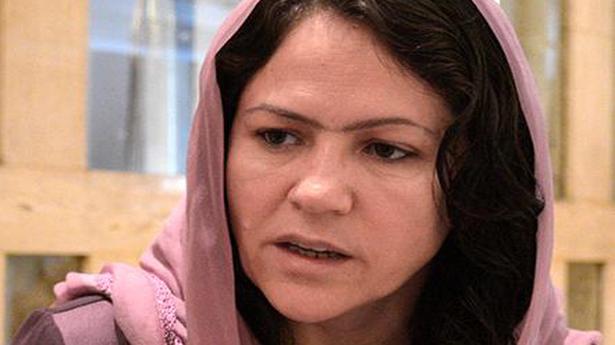 Afghanistan’s first women Deputy Speaker in Parliament and member of the team of negotiators engaging the Taliban in talks in Doha, Fawzia Koofi has been named one of the “favourites” among nominees for this year’s Nobel Peace Prize, due to be announced on October 9. Ms. Koofi, who has survived at least two assassination attempts, including one just two months ago before talks began, said the nomination itself was a “recognition” for the peace process, and would “empower” the role of Afghan women at Doha in particular.

“I think this is a recognition of all of the efforts that Afghan women have undergone in order to be included in the [reconciliation] process, to be heard,” Ms. Koofi said, speaking to The Hindu from Doha, where she will participate in the next round of talks beginning Monday. And I think that the [Nobel nomination] gives me personally, much more power, along with my other three sisters (other women negotiators in the team) who are in this process of negotiation because we do have to try harder,” she added.

Ms. Koofi, one of Afghanistan’s most prominent politicians, was first elected to Parliament in 2005 when she was also elected the Deputy Speaker of Parliament. Her bid to stand for President was thwarted after new age rules disqualified her, but she has been a strong votary for women’s rights, piloting a Bill on the eradication of violence against women, and has campaigned for the inclusion of women in the reconciliation process. Ms. Koofi, whose father and brother were killed during the Taliban regime (1996-2001), also lost her husband who was repeatedly jailed by the Taliban, and died of an illness contracted there. She has been targeted by militants a number of times, including in 2010, when she was shot at, and again on August 16 this year, just weeks before the Doha talks began, when gunmen shot at her and her daughter, and a bullet injured her right arm. She attended the talks with her hand in a sling, nevertheless.

“I do not want to be considered as just a woman, I want to be considered as representative of my country and as a politician, who have equal rights to sit across the table and discuss the future of her country. and therefore, if [the Taliban] want to really reconcile and if they want to pursue their political agendas, not through bullets, but through ballots, then they have to respect diversity and accept that we are part of the new Afghanistan.”

The announcement of the winner will be made in Oslo by the Norwegian Nobel Committee on Friday. According to the committee’s rules, the names of nominees are not disclosed for 50 years, and the frontrunner list is not “official”. However, last week, the Norwegian Peace Council, an umbrella NGO of 20 Norwegian Peace organisations in Oslo released its list of five frontrunners for the Nobel Peace Prize, choosing Ms. Koofi as the top favourite, out of a total number of 318 candidates. The list of favourites included media freedom groups Reporters Without Borders & Committee to Protect Journalists, New Zealand PM Jacinda Arden.

“The fact that we have come up to hear in the peace process, and had our voice heard is very important, and whether we win or not, this recognition itself is a big success for women and for all of Afghanistan,” she said.

How to Kill a Vampire: Not With This Kit, Apparently

New York City is on track to begin ‘phase one’ reopening on June 8, Gov. Cuomo says

Who Says Crime Doesn’t Pay? In These Novels, It Does

COVID-19 Exposes How Many Unemployment Websites Are Truly Terrible