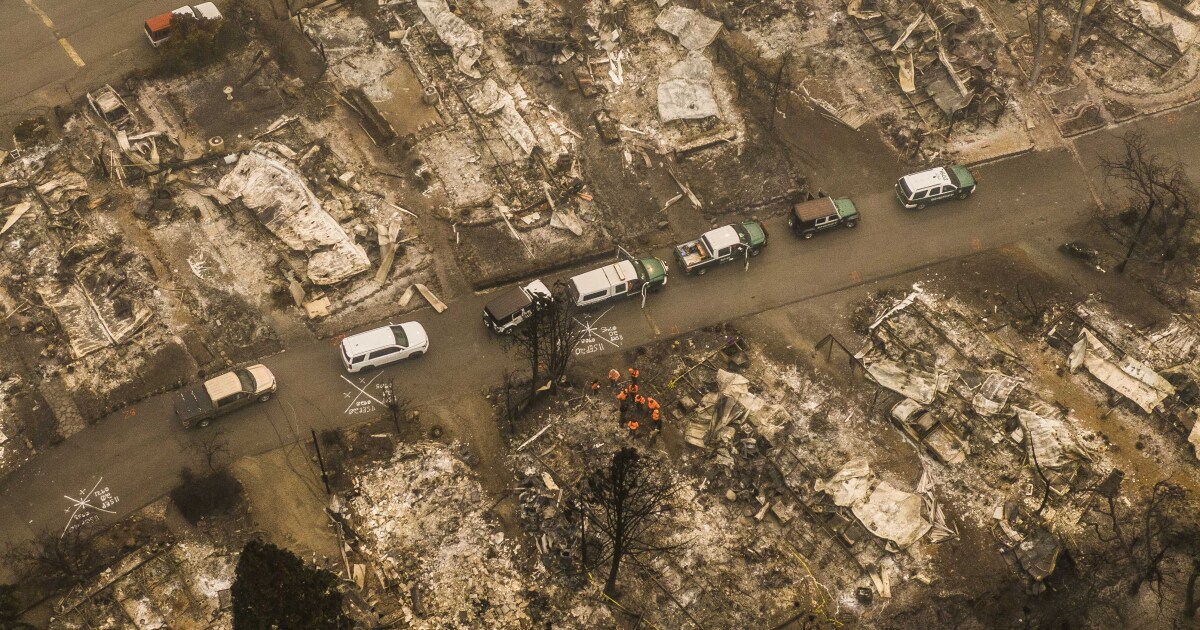 Seeing the charred ruins of her home for the first time after wildfires ripped through the towering firs and oaks of surrounding Santiam Canyon, killing a neighboring boy and his grandmother, Mary Chenault stifled tears in the smoky air.

“We’ve never seen anything like this,” said Chenault, 68, who moved to the lush canyon east of Salem with her husband 30 years ago from Anaheim, never expecting wildfires to follow them to the Pacific Northwest. “I don’t think there’s going to be anything to save.”

Across Oregon on Friday, fire officials reported 35 fires were raging after a week of deadly blazes fueled by unseasonably strong winds and dry weather turned much of the Pacific Northwest into an inferno. Blazes have burned more than 1 million acres — 1,500 square miles, a span larger than Rhode Island and nearly double the destruction of smaller fires in years’ past. The scene was at once historic and horrific as tens of thousands evacuated, and houses and buildings were consumed.

“Almost anywhere in the state you can feel this right now,” she said.

At least five people had died and dozens were still missing, and Oregon was “preparing for a mass fatality event,” said Andrew Phelps, the state’s emergency management director.

Outside Portland, the state’s largest metro area of about 2 million, hundreds of firefighters battled two large fires Friday that threatened to merge. The city’s convention center and the state fairgrounds in Salem had both been turned into shelters. East of Salem, firetrucks and hot spot teams lined the highway, battling two fires that merged earlier this week.

As 40,000 people fled their homes, and more than 400,000 others prepared to do so, the White House approved an emergency declaration to help provide immediate assistance from the Federal Emergency Management Agency.

Fires blanketed fields and farms from Portland south to Eugene with snowy ash, turning vineyards and pumpkin patches into surreal moonscapes. In rural canyons and logging towns to the east, some tried to save their crops and animals, ushering horses and livestock into trailers. Others forced to flee at the last minute left barn doors gaping, cattle and chickens roaming free. To the south, near the California border, residents returned to find the towns of Phoenix and Talent flattened, gray and smoldering.

The Chenaults, like many of their neighbors, escaped with just the clothes on their backs after being awakened by a police officer who knocked on their door early Tuesday and told them to leave.

When they returned Friday morning, their rural road was engulfed in an ashy haze, the sun an ominous red ball. Across the road, the canyon dropped off into the Little North Santiam River, a natural fire break that saved some of their neighbors’ homes.

Steve Chenault, 68, who works part time for the state Department of Transportation, watched as his wife combed their wreckage for jewelry and other keepsakes.

The couple worried about thieves targeting the area. The day before, they had seen police arrest two men nearby on suspicion of looting, a special charge covering burglary and theft during a state of emergency, and others have been arrested in neighboring canyon towns.

But after a brief search, the couple left empty-handed, more concerned about their safety in what was an active fire zone. Fire crews and neighbors were spraying hot spots nearby. Many surrounding roads were closed, but a police officer had let them through out of sympathy.

State fire managers met at the Lyons fire station to plot strategies in the parking lot as donations piled up inside near Fire Chief Bob Johnston and Gary Rychard, president of the department’s board. An exhausted firefighter walked past, face covered in ash. Johnston said he was awaiting the arrival of the latest crews from out of town to help his volunteer department’s 15 firefighters.

“We had firefighters on the fighting line for 40 hours. They didn’t know what had happened to their own houses,” Rychard said. “We’re a small community and we’ll stick together.”

A few miles up the road in Mill City, population 2,000, retirees David and Dorothy Keasey avoided police roadblocks by walking a mile past the smoking remains of homes to reach their property. They passed streets that were mostly silent except for a few shrill smoke detectors sounding in the hazy half-darkness. Once they reached their driveway, the couple scrambled over fallen trees and smoldering roots to reach their home, which had not burned — yet. Her brother brought a jug of water he used to douse several small fires in the yard.

They ran into the mayor, Tim Kirsch. He was driving around with a public works employee, assessing damage and ensuring the city’s water supply didn’t run dry. Earlier this week, firefighters had almost exhausted it, he said, but he considered them “blessed”: They lost 20 structures, far less than canyon towns a few miles east like Gates, which was 75% burned.

“The ridge over there is still actively burning,” Kirsch said from his pickup, praising local volunteer firefighters. “Right across the river here, the Fire Department held the line. If they hadn’t, it would have wiped out the city.”

Lori Hopkins, 53, evacuated from Gates with a friend early Tuesday as the house where they were staying was destroyed by wildfires. They drove west Friday to an American Red Cross shelter at the state fairgrounds in Salem, already filled with several dozen cars and RVs.

“We were going to go down the coast — now they’re evacuating too,” Hopkins said.

In Gates, a town of about 500, some residents had already returned Friday after evacuating, determined to defend the few structures that remain from hot spots and stray embers, mesmerizing as dangerous fireflies. They drove around town in pickups outfitted with water tanks and fire hoses, dousing still-smoldering properties as they passed.

On the back of one of the trucks was Jon Pennick, 16, whose family’s 108-year-old farmhouse was destroyed. His grandparents’ home nearby burned too. The high school junior hadn’t been able to see the sites yet, because roads were still blocked by sheriff’s deputies. So he was staying with friends and fighting fires near their homes.

“We just need more help at this point. Fire crews don’t have enough,” he said.

Nearby, his neighbor Eric Benolken was hauling water in a four-wheeler to fight small fires. Benolken, 56, a contractor, said his 87-year-old mother’s house and his entire neighborhood burned — except his home near the river.

His mother evacuated to stay with family in Portland. Benolken wasn’t sure whether she would have to evacuate again as fires spread there.

In the Kitchen and on the Best-Seller List, Young Cooks Take the Lead

What Is Happening With TikTok and WeChat as Trump Tries to Ban Them?

How the Pandemic Has Affected Passports, Global Entry, T.S.A. PreCheck and More

Phil May, British Rocker of Unbridled Energy, Is Dead at 75 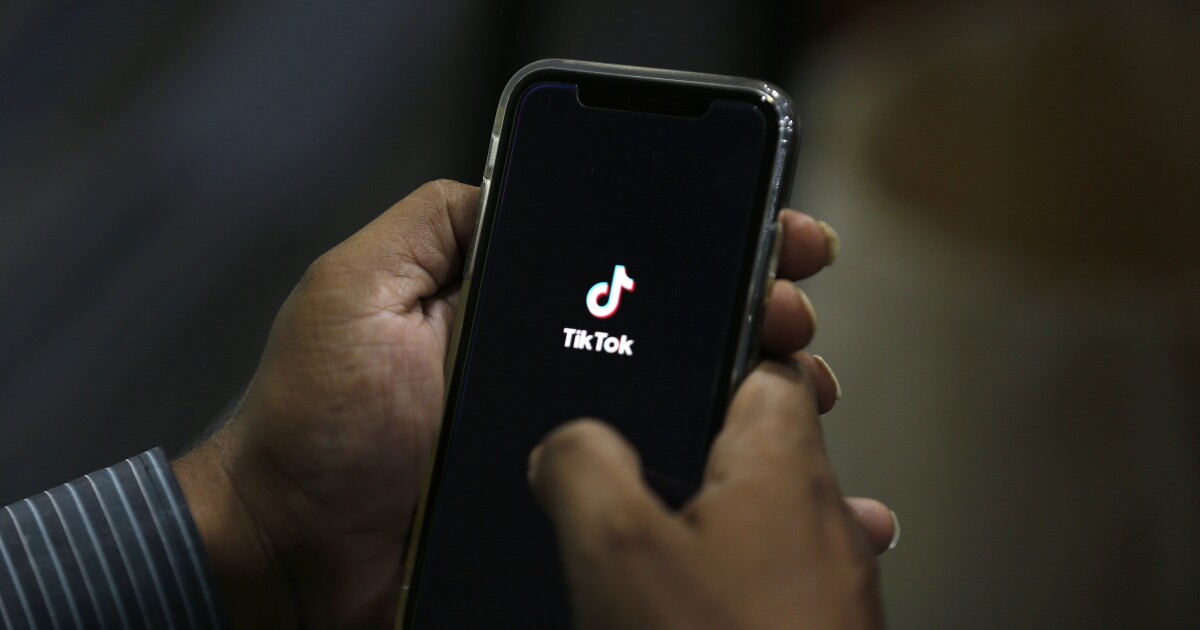 ‘I am part of the collateral damage’: Trump’s TikTok battle creates nightmare for some tech workers