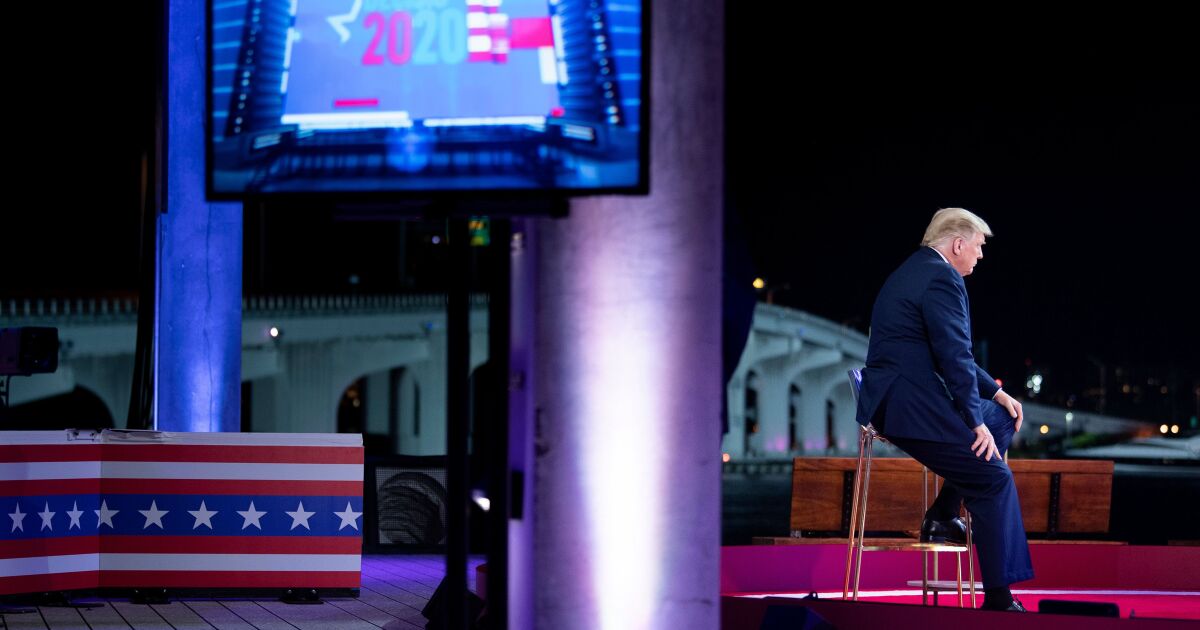 Pay attention. That’s what I’ve been telling myself for the last four years, despite wanting to run and hide from anything remotely related to Washington, politics, Russia or the presidency. Like everyone, my attention span is shot, my bandwidth reduced from a 14-lane highway to a narrow footpath.

From ‘COVFEFE’ to locking up children to worshiping Putin to championing the ingestion of bleach as a potential cure for COVID-19 (after he claimed the disease caused by the novel coronavirus would miraculously disappear), every day Trump’s been in office has felt like a wicked Pick Your Poison game show: Keep watching, reading and doomscrolling because history needs witnesses? Or ignore the pandemonium, pretend it’s 2015, and embrace your apathetic complicity in democracy’s downfall? Choose carefully, Lorraine!

Tonight, I’ve decided on option two: I will not watch Trump’s town hall on NBC, and I may just skip Joe Biden’s show on ABC as well. Both are scheduled to air at exactly the same time, 5 p.m. PDT. Call them dueling town halls, or a rivalry for ratings. But tonight’s showdown is a pointless exercise.

The town halls come in lieu of a second presidential debate, which was supposed to take place tonight until the president backed out. After Trump contracted COVID-19 along with seemingly half of the GOP, especially employees in the West Wing, the Commission on Presidential Debates decided the debate should be held virtually. Trump refused, even though he’s been doing just about everything else — made-for-TV medical exams, making fun of seniors — via teleconferencing, social media and Rush Limbaugh‘s show.

The commission could have awarded the forum to the candidate who was adult enough to follow pandemic-era rules, but no. It canceled the debate, so Biden went ahead and scheduled his own town hall.

Then NBC announced Wednesday that it would reward Trump’s petulant behavior by giving him exactly what he wants: a town hall of his own, at the exact same time as Biden’s.

NBC is being widely criticized for the abrupt move: “Thanks, NBC,” Jimmy Kimmel said Wednesday on his show. “First ‘The Apprentice’ and now this. Why not a new Bill Cosby special while we’re at it? There is no good reason to hold these events simultaneously. They could delay them.”

Ironically, the event’s loudest detractor has been Trump himself. He dragged the network for hosting his spectacle. He told a crowd at one of his potential super-spreader rallies that NBC is “the worst,” and he repeatedly insulted the network and town hall host Savannah Guthrie. “I figured, what the hell, we get a free hour on television.” It was one of the rare instances where Trump was transparent.

NBC, for its part, has been among Trump’s greatest supporters. It provided the launchpad for his ascent into the White House by letting the failing businessman portray himself as a successful mogul in “The Apprentice.” It also declined to release raw tapes from the show during his 2016 campaign in which it was alleged he used racial slurs, harassed women and exhibited the behavior of the petty tyrant with whom we’re now so familiar.

This from the same network that owned “Access Hollywood,” source of the now-infamous leaked tape that rocked the 2016 election four years ago this month. The network, as the second season of Slate’s “Slow Burn” podcast reported, that mishandled a bombshell interview with Bill Clinton accuser Juanita Broaddrick. The network that killed Ronan Farrow’s investigation into the sexual misconduct of Harvey Weinstein, later published by the New Yorker.

The network’s questionable decision-making aside, there’s another reason tonight’s head-to-head programming is not worth watching: You’ve seen it all before. Sure, time-shifting is ubiquitous, but in an immediate-response culture like this one, broadcasting the town halls at the same time demands viewers pick a side — and really, what new is going to come out of that red state/blue state dynamic? It represents the way people already consume their media, except now it’s come to inflect the major broadcast networks, and not just their cable news counterparts.

A true political debate forces supporters of both parties to “meet” in the same room, or at least watch the same livestream, in a highly polarized climate. Democrats may have to mute Trump’s high-decibel bluster. Republicans can poke fun of Biden for wearing a mask (sigh). But at least the two parties are exposed to each other.

And in 2020, do you know anyone — political junkies perhaps excepted — who would bother to watch one and DVR the other anyway?

Informed voters are crucial for America’s health and future, but it’s doubtful tonight will offer an opportunity to learn anything new about the candidates, or sway any of that vanishing demographic, the undecided voter. So I’m opting to tune out. There are 19 more days, or perhaps four more years, that demand my undying attention.

Watch live: WHO holds press conference on the coronavirus after Trump says US will halt funding

New York’s Days of Protest: What It Looked Like from the Streets