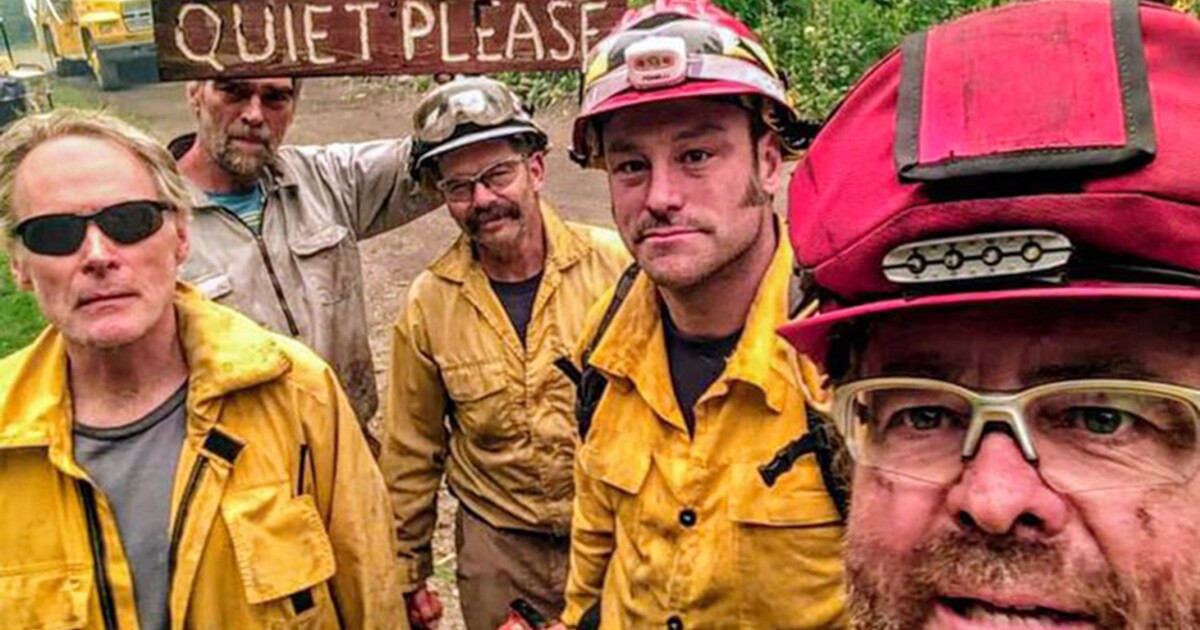 Managers of the Breitenbush hot springs resort deep in the Oregon wilderness were not particularly worried about the Lionshead fire, which for more than two weeks had been simmering behind a mountain 20 miles away.

Then on Sept. 7, sudden and highly unusual winds — driven by a shift in the jet stream — propelled flames through the drought-parched Willamette National Forest toward the historic retreat.

That night, with an eerie orange glow breathing behind a forested ridge a few miles away, almost all 150 guests and workers evacuated, along with the volunteer fire department, whose members thought it too dangerous to remain.

Two summer residents in their 60s, Daniel Dundon, who had fought wildfires before, and Tim McDevitt, who had not, decided to stay and take on the blaze themselves.

The fire, which had grown to 20,000 acres, arrived the next day before dawn, spitting embers, toppling trees, exploding propane tanks, torching the sanctuary structure and burning a dozen guesthouses.

Dashing among wooden buildings, Dundon and McDevitt used garden hoses and sprinklers to soak the sides of the lodge and a commercial kitchen. They stomped on embers and shoveled dirt on firebrands.

Fire Chief Jacob Pollack, who ran the department from Port Townsend, Wash., 250 miles north, planned to try reaching them through the back side of the advancing wildfire.

But for now — as acrid smoke made morning seem like night — they were on their own.

Visitors to Breitenbush have long spoken of the retreat, located 60 miles southeast of Portland, in reverential tones.

The resort was founded in 1927, when Merle Bruckman, whose father made a fortune from inventing the waffle ice cream cone machine, purchased an old 160-acre homestead in the national forest and put in a road.

His company built the lodge and an Olympic-sized swimming pool and began generating electricity using a turbine shipped by rail from Ohio.

The resort, named for Peter Breitenbush, a one-armed Dutch explorer, was marketed as “the Lourdes of Oregon,” after the famed French shrine, for the purported healing powers of its natural hot springs.

But after flood damage and a series of attempted sales, the resort shut down in 1972.

Five years later, Alex Beamer, a 27-year-old from Oakland, bought the place for $250,000 and talked friends into four years of work without pay to fix it up. They drilled geothermal wells to build a heating system and replacing wood stoves with radiators in guest cottages to remain open through snowy winters.

Paul Clearfire, who moved there in 2003 after Beamer left Breitenbush under the control of a workers’ cooperative, equated the retreat to a fairyland.

“You can’t escape the sense that there’s something present bigger than yourself, and that it’s a compassionate presence,” he said. “There’s something that happens to people there, soaking naked in this opulent wilderness, and the whole land just envelopes you and makes you feel safe.”

Pollack and two friends, firefighters Erik Wennstrom and Neil Clasen, took a back way to the retreat Sept. 8, passing a flaming Forest Service ranger station and chainsawing their way through trees that had fallen across roads.

When they finally arrived that afternoon, the situation was dire.

The massage building was a fireball. The last of 42 guest cabins were also burning, along with staff housing and many summer homes.

Wennstrom grabbed a fire extinguisher and ran with a shovel toward two blazing houses in hopes of slowing the spread.

Wind raced up the canyon and then shifted, bringing a fire front that blasted embers ahead of its path. The retreat’s small firehouse was useless, as flames licked its base. Fire hoses laid out by the river were burning.

Unable to see through the thick smoke, Wennstrom fell through a manhole cover, climbed out and kept working.

Calmly, he panned his video camera across four structures engulfed in crackling flames, narrating footage that he could use for training.

“Anyway, it’s just, uh, another day at Breitenbush,” he said.

The men tried to start up a firetruck, but its batteries were dead, so instead they pumped water from the river to fill a tank on a flatbed pickup. They extinguished flames on a footbridge over the river, and doused fires at the base of trees so they wouldn’t burn through and topple.

They worked through the night, taking turns catching brief naps. At 4 a.m. on Sept. 9, Pollack woke Clasen after realizing that a bright orange glow through trees was not sunrise but approaching fire.

Its roar, punctuated by explosions, stunned Clasen, a county firefighter who had never dealt with wildfire.

For food, the men raided the kitchen, thankful it hadn’t burned. Wennstrom had brought his own meals. “I’m not crazy about that vegetarian Indian food they serve up there,” he said.

By the next day the wind had died down. While hot spots remained, the main fire had passed.

Pollack used a backhoe to knock down burned trees that looked unstable.

Pollack took inventory. Gone were a healing arts building, several workshops and dozens of summer homes in a neighboring community.

Driving out, the exhausted men again sawed their way through fallen trees. They were stunned to discover that another massive wildfire had ripped through the towns of Detroit and Gates, destroying almost everything.

Clasen called his wife at their home outside of Portland.

“I told her that she would not believe how bad things were,” he said. “And she said to me, ‘You wouldn’t believe what’s going on here — we’re a mile from the evacuation zone.’”

The east winds that drove the Lionshead wildfire, expanding it to 190,000 acres, had fanned three dozen other fires around the state.

It was some of the worst destruction Oregon had ever experienced. At least eight people had died. More than 40,000 residents had fled their homes. About 1 million acres had burned.

In Salem, Ore., 45 miles west of Breitenbush, Peter Moore, the retreat’s business director, recalled the billowing black plume of smoke he had seen rising thousands of feet, illuminated by a blood red moon and flames below, after almost everyone had evacuated.

“There was a miles-wide fire front roaring over the crest” of the ridge, he said. “It was taking everything in its path.”

He marveled that anything survived — and vowed to rebuild.

“We always knew that fire was a possibility,” he said. “It’s part of the natural cycle of things.”

What It’s Like Living in 9 Parts of N.Y.C. Facing a New Lockdown ‘Better Call Saul’: Kim and Jimmy got married. But what’s next for Kim?

Tiktok Under Scrutiny In Australia Over Security, Data Concerns

‘Bill & Ted Face the Music’ Review: Be Adequate to Each Other

Review: A Legal Battle Over Adoption in ‘The Copper Children’

This Ex-Taliban Commander Is Now the Face of Afghan Security

How Many Children Do I Have? It’s Not So Simple