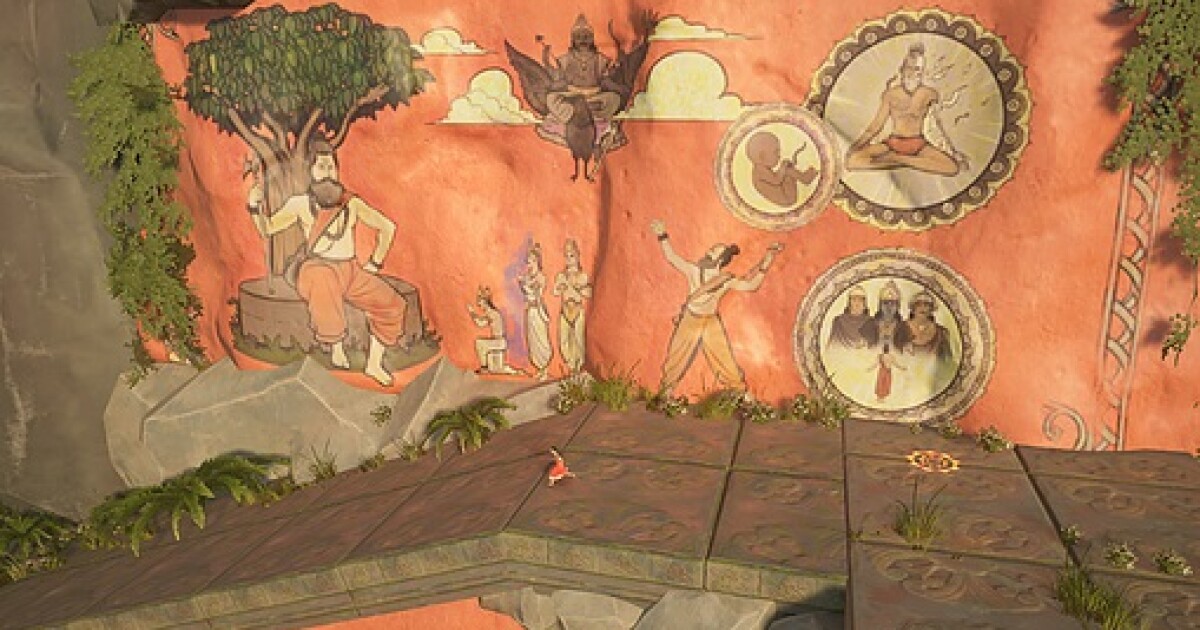 I played an hour of “Raji: An Ancient Epic” before I stopped and restarted. While it’s not uncommon for players to reboot a game after learning its basic controls, that wasn’t what made me want to begin again. “Raji: An Ancient Epic” reminded me of a sensation I hadn’t thought about much during the pandemic: the feeling of exploring and discovering a new place.

“Raji: An Ancient Epic” isn’t a replacement for a vacation, of course — no video game or virtual reality experience is yet that transportive — but it sparked a desire to analyze, to examine and to understand the in-game surroundings and its inspirations. A game that could be completed in a weekend stretched into a full week as I began writing down the names of deities such as Mahishasura and Kali for further research.

On the surface, “Raji: An Ancient Epic” is an action adventure game.

Its tale of a young woman rescuing her brother from forces of the underworld can be told with many backdrops across numerous cultures. But “Raji: An Ancient Epic,” a labor of love that was often a struggle to get made by its small team, has a rather specific design intent. Beyond asking players to tackle its demon-like monsters with acrobatic fight moves, the game seeks to highlight a place — ancient India — and the culture it birthed.

Thus, as I advanced through “Raji: An Ancient Epic” and dedicated myself to mastering the game’s relatively robust combo-based fighting system, I discovered a decorative, lush world. The way “Raji” mixes and matches game genres is slickly done — running, jumping and climbing through ruins requires precision and concentration. But for all of its sense play, the game also seems to possess an understanding of history. Its interactive text is built on mythologies that have gone largely unexplored in modern Western media, especially games, where an America obsession tends to dominate.

“Raji: An Ancient Epic” made me feel like a traveler called to dig deeper, to learn more outside the game about the Hindu and Balinese legends, stories and settings that are interwoven into the project. One area of the game was directly inspired by the golden sandstone prevalent in the Indian city of Jaisalmer, home to the famed fortress whose tiered walls seem ripe for video game leaps. The intricate carvings of the Ajanta Caves served as inspiration, too, as our hero, Raji, traverses ruins with larger-than-life animal carvings.

“From the very beginning we wanted to do a game that represents Hindu culture. We didn’t see any game that was made from India that had that,” says Shruti Ghosh, cofounder of the Pune, India-based Nodding Heads Games, whose founders had jobs at the Indian outposts of major game studios before going independent in 2017. “We had not seen a game made with this mythology. So we just went for it.”

While the game uses religious iconography, seeking to re-create Indian temples and their patiently painted murals of Hindu legends, “Raji: An Ancient Epic” itself is an original good-versus-evil story.

The gods and demons are shown in art throughout, and the game is narrated by the deities Durga and Vishnu. The small team uses the stories more to illustrate a lineage, to create the sensation that the player-led character is creating a new myth. Great pains, however, were taken to show reverence.

“Smudging the image of any god was a big no. Even small things, like in Hindu culture your feet cannot point toward a god,” says studio cofounder Avichal Singh.

“This is a rule,” he continues. “Your feet shouldn’t be pointing toward gods. It’s disrespectful. If you have gods on your table, you can’t put your feet up there. We’ve taken care of such small things. There was a moment where Raji was doing a wall-run over a particular statue, and we could not do that. The story of the game is the gods are watching you and blessing you, so there’s no reason to have any kind of offense toward a god. It helped the game.”

Completing the game, which is currently available for the Nintendo Switch and coming to the PC, PlayStation 4 and Xbox One in October, became something of a mission for the team. For Ghosh, the more she studied the art of medieval India, the more she saw the game as a way to showcase traditions that are being lost — a point that was underlined when she and the studio’s third cofounder, Ian Maude, were in Bali and learned about passed-down mask-making traditions.

She crafted the game’s hand-painted art style, including many of the murals that dot the digital rockwork. Occasionally, as Raji runs past them, they spring to life, becoming more animated as the narration tells of the bygone but venerable myths of the Hindu gods. Scaled down to the game’s miniature art style, it’s a Pahari-inspired look that wouldn’t be out of place in an ancient manuscript.

“In India, all these art forms are slowly dying,” Ghosh says. “Nobody wants to learn this anymore. Where are they going to be used? This is the reason I wanted to pay tribute to that style. It’s so beautiful. It’s so intriguing, and the amount of hard work, the exact patience you need to do this kind of art, is mind-blowing. But it’s going to be lost with time. So for people to see that there is something like this, and it can result in another art form, is something I wanted to bring to the game.”

Ghosh also orchestrated the game’s interstitial scenes, which take their look from Balinese shadow puppetry. Here, the orange-yellow backdrops contrast the fragility of the paper-like cutouts with a sinister tone. And for those paying extra close attention, Singh says the fighting combos that players can piece together specifically recall martial arts moves that originated in India.

All this detail was helped in part by the time it took to make the game, even if the team was in a panic after a 2017 campaign on crowdfunding site Kickstarter failed. “We used all our savings,” says Maude. While the team eventually linked with investor Super.com and also received in 2018 an Unreal Dev Grant from Epic Games, they were at one point asking their families for grocery money.

“We were desperate for money,” says Maude. “Shruti sold her apartment. But our families could see how important this project was to us. We were literally using all our funds to keep a roof over our heads. Us three weren’t taking a salary.”

Of course, it helped, says the team, that when they went family seeking cash that they were working on a game that was encouraging them to discover a history that, as children, they sometimes rolled their eyes at.

“We’ve learned so much about things that we didn’t know about our own gods,” Ghosh says. “I was calling my mother going, ‘Is this true? Is this actually true?’ I come from a part of India where goddess Durga is worshipped the most, and my family has been worshipping goddess Kali since who knows when. For me, to read all this stuff has been eye-opening because I didn’t care much when growing up. This has been formative for us too.”

Coronavirus in Latin America: How bad is it?

As Genoa Inaugurates New Bridge, the Feeling Is Bittersweet

I Was Bloodied and Dazed. Beirut Strangers Treated Me Like a Friend.