Donald Trump “deliberately misled” Americans on coronavirus, Democratic vice presidential nominee Kamala Harris has said, referring to the US president’s comments on the issue revealed in a forthcoming book authored by a renowned investigative journalist.

Penned by American journalist Bob Woodward, the book ‘Rage’ to be launched on September 15 has stirred several controversies around Trump’s presidency, weeks before the US election to be held on November 3.

Woodward in the book claimed that Trump during several interviews to him said that he downplayed the coronavirus threat.

“I wanted to, I wanted to always play it (coronavirus threat) down,” Trump was purportedly heard telling Woodward in an audio clip released by The Washington Post.

“I still like playing it down, because I don’t want to create a panic,” Trump told the veteran journalist in March.

Reacting to Trump’s comments, Indian-American Senator Harris on Thursday said, “He deliberately misled the American people, because he thought it would look bad for him.”

“These are real people, people with families, with plans, with dreams that have been taken from them in many cases, and, you know, obviously Donald Trump didn’t cause COVID-19, but he has failed in his most basic duty, which is the duty of a leader, especially in a moment of crisis to not only protect, but to tell the truth.

“This is just basically unforgivable for a president. And the reality is Americans are not going to stand for it,” she said during in a virtual fundraiser.

In another interview on February 7, the audio clip of which was posted by ‘The Washington Post’, Trump told Woodward that the coronavirus was deadlier than the flu and could be transmitted through the air.

“That’s always tougher than the touch. You don’t have to touch things. Right? But the air, you just breath the air and that’s how it’s passed. It’s also more deadly than even your strenuous flu,” Trump was heard saying in the audio clip.

According to the book, Trump told Woodward that he would triumph over the COVID-19 pandemic and the economic calamity.

In another fundraiser on Thursday, Harris said Trump knew the facts about the deadly virus but still downplayed the threat publicly.

“It’s time for him to go but this recent revelation is just more of the same, which tells us, Donald Trump has put himself ahead of the interests of the American people. And he has done it continuously.”

Earlier at an event in Florida, Harris said the president and the vice president were informed about the imminence and the dangers of COVID-19 on January 28.

“On February 7, the president…said that COVID was deadly stuff, that it is airborne…This is the same man…who for days, weeks, if not months, thereafter calls it a hoax, dismissed the seriousness of it to the point that he suggested people should not wear masks. He knew it was airborne, that people would breathe it,” Harris said.

She said Trump is engaged “in reckless disregard of the lives and health and well being” of the American people. “I find it so outrageous,” she said.

“There are so many reasons why Joe Biden needs to be elected President of the United States. And if those reasons did not make it clear why, this certainly does,” Harris said.

White House Press Secretary: Golf Is Inappropriate While U.S. Mourns (But Not For Trump)

Trump vs Biden: Where they stand on health, economy, more

How companies plan to hire robots after coronavirus layoffs

A Manhunt on the 17th Century’s High Seas 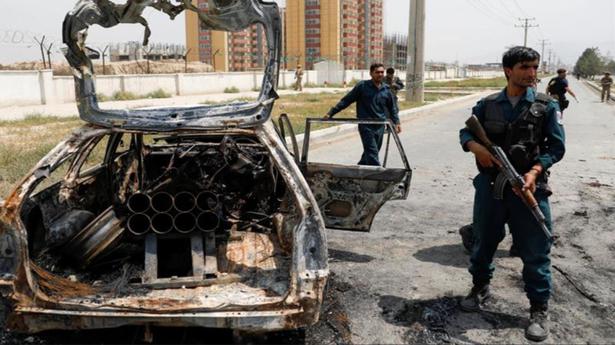 A.O. Scott on the Work of Wallace Stegner