Glenn Close’s cheeks are bruised, her eyes half-closed; a clear oxygen tube snakes out of her nostrils under a mop of disheveled gray hair. The lamp on her night stand casts a long shadow across her face as she lies in bed at her home in Montana, too weak to move.

In August, the Tony Award-winning actress served as her own wig master, makeup artist and camera operator as she transformed herself into Roy Cohn, the closeted gay lawyer, to film a scene from “Angels in America: A Gay Fantasia on National Themes.”

A starry cast that also includes Laura Linney, Patti LuPone, S. Epatha Merkerson and Jeremy O. Harris will present a free hourlong virtual benefit performance of seven scenes from “Angels in America,” Tony Kushner’s two-part 1993 play about the AIDS epidemic, on Oct. 8. The show, which can be streamed live at 7:30 p.m. on the Broadway.com YouTube channel, will be a benefit for the Foundation for AIDS Research (amfAR) Fund to Fight Covid-19.

Though the 15 actors filmed themselves in separate locations, in a feat of technical wizardry, their likenesses have been collaged together to make it look as though they are in the same room. “It lives between a theater piece and a film,” the performance’s director, Ellie Heyman, said. “I’ve never worked on anything like it.”

The casting often departs from tradition, and changes from scene to scene. The drug-addicted housewife Harper Pitt is typically played by a woman in her early 30s, but in this production, the 89-year-old actress Lois Smith tackles the role. And Brian Tyree Henry, a Black man, is one of three performers stepping into a part usually filled by a white actor: Prior Walter, a 30-year-old gay man who contracts AIDS. (The other two will be Paul Dano and Andrew Rannells.)

The play, which debuted on Broadway in 1993 to glowing reviews, tells the story of two young couples, one gay and one heterosexual, whose lives intersect — and unravel — amid the AIDS crisis. In a review of the 2018 Broadway revival, the New York Times critic Ben Brantley called the Tony Award- and Pulitzer Prize-winning epic “arguably the most important play of the second half of the 20th century.”

While the initial fear that surrounded the AIDS epidemic has dissipated given that a diagnosis is no longer a death sentence, Kushner said he found new relevance in the work in light of the coronavirus pandemic. “The world is being clobbered by a thing that reminded me of the ‘gay cancer’ I first read about when I was 25,” he said in an interview this week.

The actors filmed themselves on iPhones in locations from Bozeman, Mont. (Close) to London (Harris). Close borrowed an IV pole, oxygen tube and hospital gown, then used tin foil and a 15-watt light bulb from her refrigerator to ensure a shadow was in the right place for the hospital room scene. “We made this with duct tape and cardboard,” Heyman, the director, said. “And a lot of love.”

Perhaps most impressive is the composite angel in a scene from “Perestroika,” the second play. Four actresses — LuPone, Linda Emond, Nikki James and Daphne Rubin-Vega — recorded themselves individually, with strict guidelines: Their hair had to be pulled back “really tight,” Heyman said. They wore black tops and no makeup. “They had to look totally raw and bare,” Heyman said.

Their faces were then laid seamlessly on top of one another. “When Linda looks down and blinks, Patti’s face comes in, and her eyelids come up,” Heyman said. The process took Kevan Loney, the production’s composite editor, an average of 50 hours per week for six weeks. “It was truly a labor of love for everyone involved,” Heyman said.

“The Great Work Begins: Scenes from ‘Angels in America’” will be followed by a live conversation between Kushner; Heyman; Kevin Robert Frost, the chief executive of the Foundation for AIDS Research; and several of the actors, which will be accessible to viewers who donate $100 or more. They will discuss the play, as well as activism and Covid-19 research.

Small Worlds With Lava Oceans Might Have Given Us Meteorites

Seeing Abortion Laws From a Teenager’s Point of View 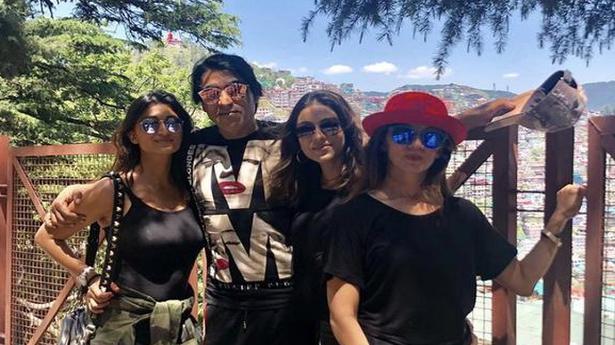