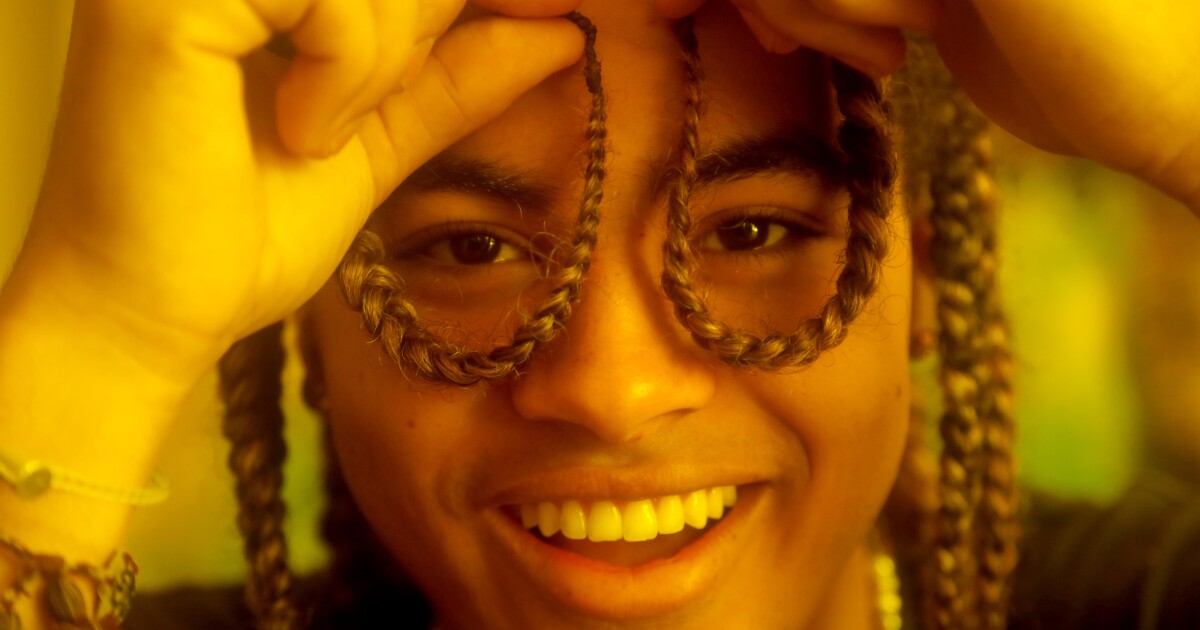 There’s an argument to be made — and 24kGoldn and his team will eagerly make it — that this 19-year-old rapper’s “Mood” is the biggest song on the planet right now.

A yelping, guitar-driven number about playing “games of love to avoid the depression,” “Mood” doesn’t sit atop Billboard’s industry-standard Hot 100, where it trails Cardi B’s “WAP,” BTS’ “Dynamite” and the international pile-up “Savage Love (Laxed — Siren Beat)” by Jason Derulo, BTS and New Zealand’s Jawsh 685. But since late September the tune has led Spotify’s Global Top 50 chart — a coveted perch at a moment when streaming largely drives the pop-music conversation.

When “Mood” came out in July, 24kGoldn said the other day, “I thought, if this gets 300 million streams in the span of a year, I’m happy as f—.” He grinned. “In three months it’s gotten more than 300 million on Spotify alone.” Tens of millions more have come from YouTube and Apple Music.

What makes “Mood’s” success especially remarkable is that a year and a half ago, 24kGoldn (whose real name is Golden Landis von Jones) was finishing his freshman year at USC on a full-ride scholarship to study business. Back then he’d already built the beginnings of an audience for his music, which he started posting online as a high school student in his native San Francisco.

But 24kGoldn enjoyed the college life — “Bitch, I Go to USC” was one early internet hit — so he stayed enrolled, returning to his room at the McCarthy Honors Residential College after playing increasingly crowded gigs around Los Angeles.

“I ate for free at the dorm, which was a big plus,” he pointed out with a laugh — less of a concern now that “Mood” is pulling in more than $100,000 a week in revenue, according to the trade journal Hits.

“College was like the perfect transition from being a random SoundCloud rapper to having the No. 1 song in the world,” said the artist, who moved to the ritzier Westside after putting his studies on hold last fall to focus on music. “I needed a little something in between.”

In a sense, 24kGoldn’s rapid ascent with “Mood,” which features another young up-and-comer in Iann Dior, is emblematic of the industry’s current fixation on viral quick-fix smashes. Like scores of recent hits, including Arizona Zervas’ “Roxanne” and StaySolidRocky’s “Party Girl,” “Mood” took off on the video-sharing app TikTok before it migrated to streaming services and radio.

Yet 24kGoldn insists he’s different from the acts who’ve struggled to lay the foundation for something longer lasting.

“Me and Lil Nas X” — the social-media phenom behind 2019’s country-trap “Old Town Road” — “we’re like the only two artists that have built a career off this,” he said from a sofa at a Hollywood rehearsal studio where he was preparing for several upcoming television performances. He wore tie-dyed harem pants and a hoodie, and as he spoke he fiddled with a retainer he’d removed from his mouth after taking off his face mask.

“And in the case of Nas, he had the traditional blow-up story that’s kind of the blueprint now,” he added, meaning that Lil Nas X was snapped up quickly amid a major-label bidding war after “Old Town Road” went viral. “People don’t know I was signed for almost a year before anything blew up.”

Indeed, Barry Weiss, the veteran label executive who signed 24kGoldn to his Sony Music imprint Records in 2018, said courting the rapper wasn’t “the typical boogie where a guy’s got a hot record on TikTok.” Weiss had been hipped by one of his A&R reps to an earlier 24kGoldn song, the equally catchy “Valentino,” and heard in it the work of a gifted songwriter and charismatic vocalist.

“This was an old-fashioned, organic signing based on talent, not on metrics,” said Weiss, who as president of Jive Records in the late ’90s shepherded the likes of Britney Spears and ’N Sync to pop superstardom. “TikTok is just the vehicle, no different than ‘TRL’ used to be. If this was 60 years ago, this kid would be writing doo-wop hits.”

In 2020, what 24kGoldn’s flexibility means is that he’s creating music that blurs the line between emo and hip-hop. Among the other charts that “Mood” has topped is Billboard’s Hot Rock & Alternative Songs, a home these days to acts like Post Malone and the late Juice Wrld who blend rapping and singing over tracks that fuse fuzzy guitars to throbbing beats.

Mike Kaplan, program director at L.A.’s influential KROQ-FM, called “Mood” “one of those first-listen records” and said it embodies the naturally diverse tastes of “millennials and Zoomers who are more multicultural than any previous generation.”

As a biracial person, 24kGoldn said, “Who better to bring those two worlds together than somebody whose entire life is a juxtaposition? My dad is Black and Catholic; my mom is white and Jewish,” he said of his parents, who both worked as fashion models. “And I’m from one of the richest cities in the world but grew up in one of San Francisco’s last hoods,” he said, referring to Oceanview (which, like many locals, he calls Lakeview).

And yet there’s a kind of market awareness to 24kGoldn’s approach that goes beyond his adolescent love of both ASAP Rocky and Lego Rock Band; you can hear him actively trying to expand the breadth of his appeal on last year’s eclectic “Dropped Outta College” EP and in collaborations he’s released since with the rapper Blackbear and the pop-EDM group Clean Bandit.

24kGoldn acted in commercials when he was a kid and says he still finds himself fighting the impulse to please everybody in a room. “That’s how I’d experienced success in the entertainment field before — by getting in front of the camera and smiling,” he said. “But nobody’s really bubbly all the time. I’m learning to be more myself.”

During the pandemic he’s been working on his debut album, which he plans to call “El Dorado” and which he hopes to put out early next year. Weiss says they’re prepping two singles for release in December: “a straight pop record and a rhythmic rap record we’re getting a big feature on.”

“Can I sit here and predict that both songs are gonna be as big as ‘Mood’?” the executive said. “Of course not. But we’re very confident.”

Asked whether he’s splurged on anything since those streaming checks started rolling in, 24kGoldn twirled one of his braids in his fingers as he thought.

“I bought a chain — a Quetzalcoatl dragon with opals in the eyes,” he said. Then he added that he was looking into leasing a car.

In ‘Hoax,’ Brian Stelter Ventures Where No Author Has Gone Before

Facebook to ban political ads in week before presidential election

These Websites and Apps Make Working From Home Less Lonely

This Grain Has Big Advantages Over Quinoa, Both For Your Health And For The Planet

In the Race for Coronavirus Drugs, This Scientist Urges a Slower Pace