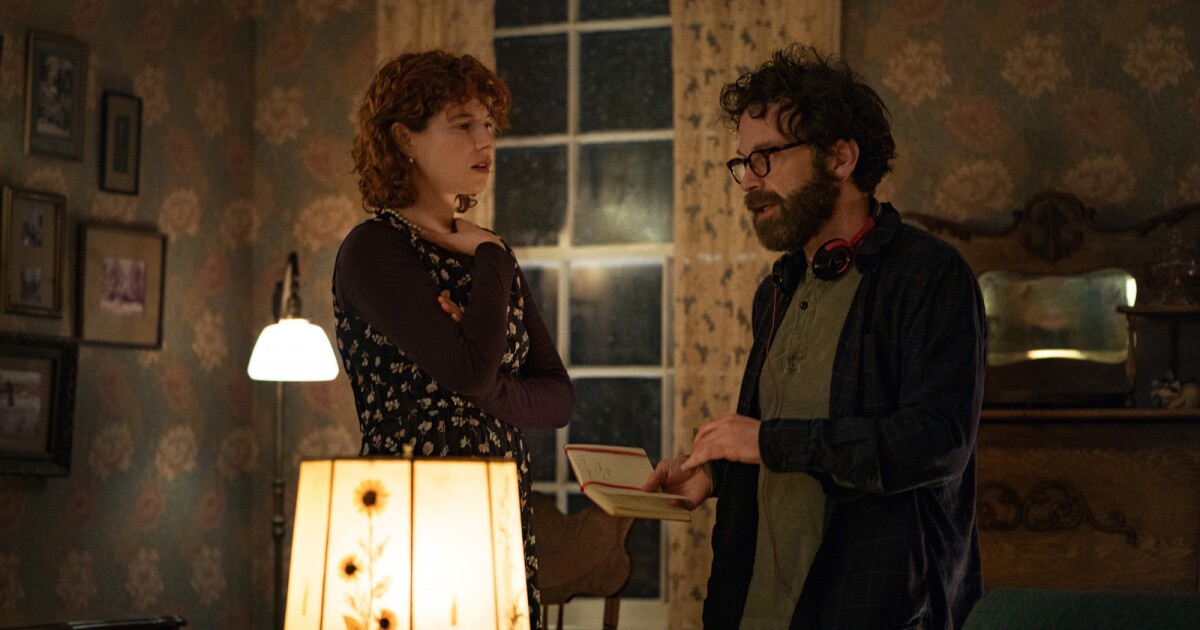 Actor Jesse Plemons has been having a hard time explaining to people what exactly his new film, “I’m Thinking of Ending Things,” is about — or even really what it is. “I’ve been saying it’s a road-trip movie,” the actor says. “A couple drives to the boyfriend’s family farm and …” He trails off. “Things get weird.” He laughs. “I don’t really know.”

Perhaps the easiest way to describe “I’m Thinking of Ending Things,” which debuts Friday on Netflix, is that it’s a Charlie Kaufman film.

Adapted from a 2016 novel by Canadian author Iain Reid, “I’m Thinking of Ending Things” is a psychological thriller — or maybe it’s a horror film or a surrealistic meditation on life or something else entirely. Kaufman, who wrote and directed the picture, has never been a fan of neat genre categories. “Genre stuff, to my mind, is by definition dishonest, because you’re playing with a formula,” he says. “There are genre-y moments in this film, but only to subvert them.”

OK, but what happens in “I’m Thinking of Ending Things”? On the surface, not very much — but surfaces, especially in a Kaufman film, are deceiving. A young couple (Plemons and Jessie Buckley) drive through a snowstorm to the home of the boyfriend’s parents (Toni Collette and David Thewlis). Along the way, mysterious clues portend some terrible event to come. Long philosophical conversations take odd turns. The identities of key characters shift unexpectedly and unnervingly. Time itself becomes unmoored.

No spoilers here, but yeah, things get weird.

In the brain-twisting metaphysical labyrinth of “I’m Thinking of Ending Things,” fans of Kaufman’s work will see echoes of earlier films that established him as Hollywood’s preeminent surrealist, including “Being John Malkovich,” “Eternal Sunshine of the Spotless Mind” and “Adaptation,” all of which he wrote, as well as “Synecdoche, New York” and “Anomalisa,” which he also directed. Characters trapped in their own heads; themes of loneliness, failure and regret; the confusing tangle of memories, projections and fantasies that make up subjective reality — all the hallmarks of the Kaufman cinematic universe show up in the film.

Drawn by Kaufman’s penchant for taking creative risks and spelunking into the recesses of the human psyche, cast members of “I’m Thinking of Ending Things” all jumped at the opportunity to be a part of his enigmatic world.

“My agent sent me the script, and it was the kind of thing where you’ve got 12 hours to read it and then it explodes,” says Irish actress and singer Buckley, who had a breakout role last year in the HBO series “Chernobyl.” “When you get something like that, even if it exists just for that, it’s a gift. But if it exists beyond that, it’s an amazing, surreal thing to come into your life.”

“There are no rules in Charlie’s films,” says Collette. “That’s incredibly freeing, both as an audience member and as an actor. His ideas move beyond the accepted ‘normal’ constructs of reality and filmmaking itself. His work makes me think differently, feel differently. I believe this is the very purpose of art.”

For years, Kaufman had been trying in vain to get his unconventional scripts onto the screen, often feeling abandoned by Hollywood in what he calls “the desert in which I existed.” Stymied by the studio system, he eventually turned to fiction; his debut novel, the 700-plus page opus “Antkind,” came out in July to strong reviews. “The lion’s share of my time over the years was trying to get my own stuff made, specifically a movie called ‘Frank or Francis’ that kept coming close to being made and falling apart,” he says. “Emotionally, it had been very frustrating for me.”

Thinking he might have better luck adapting someone else’s material, Kaufman came across Reid’s novel and sparked to it right away. “I liked the dreaminess of it,” he says. “I thought visually it was interesting, in that it was so claustrophobic and it took place mostly in a car during a snowstorm. That appealed to me. I liked the challenge. I thought maybe I could do something with this.”

Even when translating someone else’s work, Kaufman can’t help but make it his own, as anyone who has seen “Adaptation” knows. Tasked with adapting Susan Orlean’s 1998 nonfiction bestseller “The Orchid Thief,” Kaufman turned his own writer’s block into the basis for a dizzyingly self-referential and darkly comic fantasia that ultimately earned him — and, in a Kaufmanesque twist, his fictional brother Donald — an Oscar nomination for adapted screenplay. (Kaufman won the original screenplay Oscar for “Eternal Sunshine” and also earned a screenplay nod for “Being John Malkovich” and an animated feature nomination for “Anomalisa.”)

Reid had always considered his book virtually unfilmable. But after speaking with Kaufman about the project, he became excited by the prospect of handing over his story to him. “Not only did the material resonate with Charlie but he was going to take it and put it through his filter and make it something new,” Reid says. “I didn’t want him to just feel like he had to film the book. That wouldn’t be nearly as interesting or successful as if he felt completely free to make of it what he wanted. I had seen his work, so I knew it was going to be something bold and original.”

In the end, while he retained the essential bones of the novel, Kaufman created most of the film’s dialogue out of his own imagination, adding surreal imagery, fantasy sequences and a musical number that were not in the book. Still, amid all the strangeness, he tried to keep the movie rooted in relatable human emotions.

“When you have a story that goes into the realm of the surreal, which this does, it has to have a basis in something that’s recognizable — otherwise, it’s kind of just like, ‘Oh, let’s do this weird [stuff],’ ” Kaufman says. “I wanted to write about a relationship between these two people that had a lot to do with expectations and projection. I think it’s something most people do, especially early on in their relationship, and it’s very damaging, because eventually you realize this person is not this dream that you had — they’re a person with their own set of issues and problems.”

Having seen and pondered all of Kaufman’s pictures, Plemons, like many, imagined the filmmaker to be some kind of reclusive wizard and was a bit intimidated by the prospect of meeting him. “I guess unconsciously, because of that reputation, I was expecting that,” the actor says. “I was in disbelief just at the thought that he had any idea who I was. But from the first phone call on, I was blown back by how nice and easy to talk to Charlie is. There’s no facade or airs whatsoever with him. I was surprised by just his heart. He’s just extremely lovable.”

Joining the project, Buckley spent hours talking with Kaufman to prepare for the unique acting challenge of playing a character whose slippery identity — even her name keeps changing — is central to the film’s puzzle.

“Before we started, we were sharing things that were inspiring us in an abstract way in the feel of where we might end up,” Buckley says. “It was paintings or pieces of music or the sound of a particular poet’s voice, ideas that were going to add to a texture of somebody who might exist in a moment but might transcend to be something else in the next moment. It’s like instead of being a portrait artist, you get to be a surrealist painter, and Charlie allows you to figure out what colors you want to play with.”

On set, Kaufman helped steer Buckley and Plemons through a series of forbiddingly long scenes involving twisting, often cerebral and philosophical dialogue, with single takes sometimes stretching on for 25 minutes. “We played these scenes out as if they were plays,” Kaufman says. “They weren’t done in snippets. So there was constant continuity in the performances. I give credit to the cast. There was nothing really that I had to do to keep this thing on track.”

“Once we got over the shock of, ‘Holy … , we have 11 pages of dialogue again today,’ it became a lot of fun,” says Plemons. “Charlie is extremely supportive and just right there with you every step of the way, emotionally invested take after take and doing whatever he can to help find the scene. As intimidating as the script was, he definitely made us feel like it was ours to play with.”

That’s not to say that the actors ever quite fully understood the depths of the movie — or of the mind of Charlie Kaufman. Indeed, that was what made the process of making the film so rewarding and why they think it will similarly reward viewers who give themselves over to it. Just as Kaufman took Reid’s novel and made it his own, then gave it to his cast to make their own, it now belongs to the audience to make of it what they will.

“I’d send Charlie emails, saying, ‘Oh, I get it! I totally understand what this film is about!’ And then I’d read the script again and be like, ‘What the hell was I thinking? It’s not about that — it’s about this,’ ” says Buckley. “I hope that’s what happens for a lot of people. Whatever it means for anybody, I think that’s brilliant. If it starts a conversation and gets people to ask questions of themselves, I think that’s what film and art should do.”

What Does Walmart See in TikTok? Millions of Young Shoppers

MIUI 12 Global Launch Expected on May 19 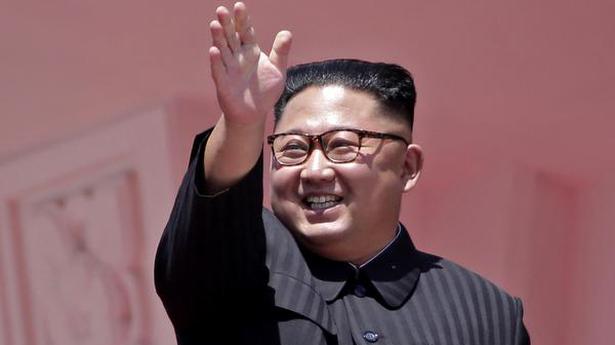 Daisy Lucidi, a Radio Voice With a Telenovela Following, Dies at 90