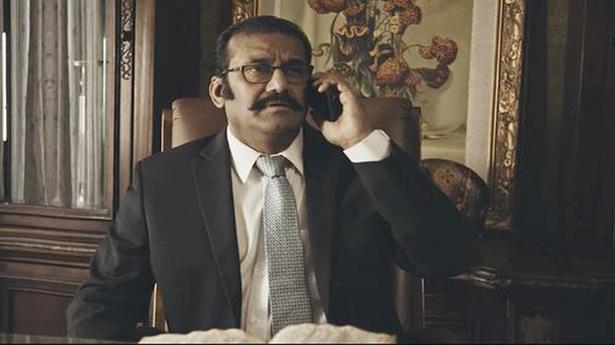 Like many other films, Hollywood flick Devil’s Night: Dawn of the Nain Rouge has taken the digital route due to the current COVID-19 situation. The crime thriller, directed by Sam Logan Khaleghi, will be available to Indian users on Amazon Prime soon.

Interestingly, there is a Tamil connection to this English film. For, it marks the Hollywood début of actor Napoleon.

“It’s positive news for me in such trying times,” says the actor, over a Zoom call from the US, where he is based now, “At a time when films are not hitting screens in most places around the globe, I’m happy that this is releasing on OTT.”

Napoleon plays a museum curator in the film that also stars Jesi Jensen and Nathan Kane Mathers (brother of Eminem). He has already worked on two other Hollywood projects, Christmas Coupon and Trap City. “I remember a time in Kollywood when every director would come for story narration and say: ‘Open panna, oru remote village sir’ (The first visuals will feature a remote village). They would then describe my character in the film, which would mostly be a rural guy. I would yearn to do sophisticated roles back then. Right now, that’s exactly what I’m doing.”

While he plays a sports agent in Christmas Coupon, he plays a bodyguard in Trap City. “The English accent was a challenge, but thankfully, I was able to pull it off,” says the actor, who hails from Tiruchi but has relocated to the US because its facilities offered a better environment for his son who has muscular dystrophy.

The other Tamil link in all the three English movies that he is part of is their producer, Tel K Ganesan, of Kyyba Films. He says, “Originally, we thought we will release in theatres, but we made this decision to release digitally due to the pandemic. With increasing eyes on OTT platforms, it’s a great way to keep interest levels high on your content.”

‘House of Hummingbird’ Review: Picture a Girl, Picture a World

Opinion | America, This Is Your Chance

Patients with autoimmune diseases are running out of hydroxychloroquine

From the Town Square to the Boardroom: Britain Grapples With Its Racist Past