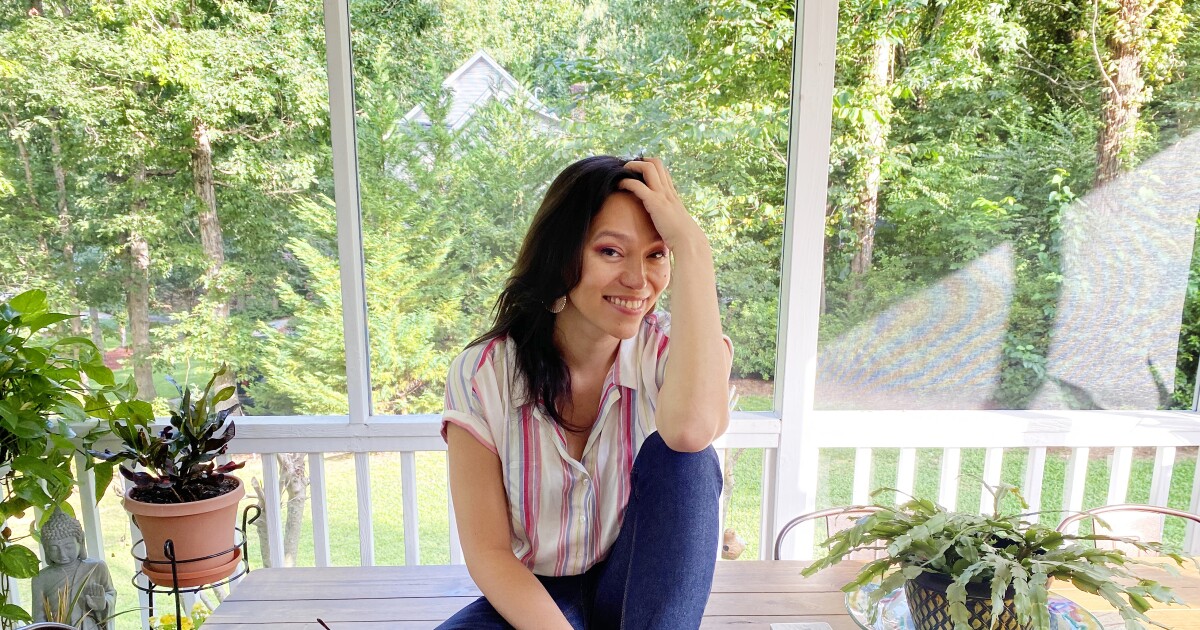 Quiet moments come alive with defiance in “Lingua Franca,” the third feature film from writer-director Isabel Sandoval. In one scene, a cautious woman tentatively allows herself to experience pleasure, a tumult of emotions erupting across her face; in another, two friends sitting in a church find solace in a softly sung hymn from their youth.

The film’s vision is at once radical and nuanced, and that the protagonist of “Lingua Franca” is a trans Filipina immigrant is both rare and deeply personal to Sandoval, who also stars in the indie drama.

“Movies about trans characters tend to focus on the gender transition process,” Sandoval said over Skype on the eve of her film’s Aug. 26 Netflix debut. “I wanted ‘Lingua Franca’ to start where these trans narratives usually end. Her transition is well behind her. That’s where I was really chronicling, in a fictional narrative, my own experiences as a trans woman living in Brooklyn.”

“Lingua Franca,” bearing what Sandoval describes as her own emotional and psychological truths, simply lets its heroine live, which is more than one could say about the America she exists in.

Olivia (Sandoval) works as a caregiver for an elderly Russian woman named Olga (Lynn Cohen) in the Brighton Beach neighborhood of Brooklyn. She sends money and balikbayan boxes — care packages — to her family in the Philippines while saving up to buy a green card marriage, the only option she sees that will allow her to legally stay in the U.S. When she meets Olga’s grandson Alex (Eamon Farren), an unexpected connection blossoms. But with newfound hope comes new anxiety for Olivia.

“One of the truly jarring emotional experiences I had when I transitioned was the first time I realized I was attracting male attention,” she said. “I felt flattered, and it gave me such a rush, but at the same time I became anxious and worried about my own safety and well-being, that feeling of being both powerful and vulnerable at the same time. I wanted to distill that and capture that feeling through the film, and through Olivia.”

Then the 2016 election happened. The movie took on deeper sociopolitical themes as Sandoval wrote Olivia’s legal status into the story. The anti-immigrant rhetoric of President Trump and his policies waft in and out of “Lingua Franca” from news broadcasts like invisible specters, filling every inch of Olivia’s world with dread.

Will she find love? Can she share her truth? Does she dare hold out hope for the future — or in reaching for happiness, is she risking it all?

“Lingua Franca” is the latest film from Ava DuVernay’s Array Releasing, focused on amplifying Black, female and diverse voices, to debut on Netflix. Recent Array titles such as “The Body Remembers When the World Broke Open” by Elle-Máijá Tailfeathers and Kathleen Hepburn, “The Burial of Kojo” by Blitz Bazawule and “Burning Cane” by Phillip Youmans have propelled bold new cinematic voices into the spotlight via the streaming platform.

“Who she is and what she’s doing is so important, especially at this time,” said Jones, who acquired “Lingua Franca” out of its film festival run, which began a year ago in Venice. “The film is a love story, but it does touch on issues of immigration and what people have to go through to be in this country, and it wasn’t centered on who most people think of as an immigrant. She is a one-woman phenom. And to see someone in [the trans] community share a different kind of story, I think, is transforming not just for that community but for the world.”

It was my intention to open and close the film with a voice-over in Cebuano. I think there’s something for me as a storyteller, staking my claim in the land that is America by telling my story in my own native tongue.

Like Olivia in “Lingua Franca,” Sandoval emigrated from the Philippines and put down roots in New York City, then faced pivotal choices about her future. Her earlier path had taken her from post-grad studies at New York University to a career in media working at a film distribution company. But she couldn’t ignore the voice in her head urging her toward her passion for storytelling.

Discussing her pictures, the longtime cinephile volunteers influences that seeped in subconsciously along the way, from the movies of Wong Kar-wai and Pedro Almodóvar in her earlier works to Chantal Akerman, Rainer Werner Fassbinder and Christian Petzold in various elements of “Lingua Franca.” Yet the film is undeniably unique to her vision, and Sandoval’s authorship is inscribed in every frame on every level.

Creative freedom and control were two reasons why she insisted on keeping the budget low, to $500,000, resulting in a 16-day shoot in fall 2018. Veteran actress Cohen (“Sex and the City”) was one of the project’s earliest champions. “Her own parents were immigrants from the Ukraine,” Sandoval said of Cohen, who died in February at age 86. “She told me that this was a story that needed to be made, and that she wanted a voice like mine to be heard.”

The filmmaker connected with Farren — “a young Christopher Walken” she’d seen in “Twin Peaks: The Return” — over Skype, and she cast him nearly a year before they’d meet in person, just before filming. “There’s that combination of intensity, vulnerability and also a sense of danger and unpredictability; you don’t know what he’s going to do next,” she said. “That was perfect for someone who was going to play Alex.”

One of their first scenes together would be the intimate encounter she describes as the opposite of 2013’s “Blue Is the Warmest Color,” which drew criticism for its explicit sex scenes and male gaze. In “Lingua Franca,” Sandoval and cinematographer Isaac Banks employ a lyrical delicacy that centers Olivia’s experience without feeling exploitative. “It’s not just naked bodies gyrating against each other,” said Sandoval. “It’s really about her gaze and about seeing a woman, and a trans woman at that, in the act of desiring and experiencing sexual pleasure.”

It’s also a pivotal character moment in Olivia’s burgeoning sense of self, and a precursor to the complications to come in her budding romance: “Seeing a woman, especially a trans woman immigrant, thinking on-screen in an American film — a character that has tended to be quite invisible for the most part — is an assertion of personhood and identity. ‘I exist. I am an agent.’”

But the most loving relationship in the movie is the friendship between Olivia and her best friend Trixie, played by actress Ivory Aquino (“When We Rise”). “One of the brilliant things about [Sandoval] is she recognizes what other things people can bring to the table that can enhance her vision,” said Aquino, who knew Sandoval before being cast in the picture.

She shared an example: After filming her principal scenes as Trixie, a fellow trans Filipina immigrant who is engaged to be married to a New Yorker, Aquino had dinner with Sandoval and a group of friends. They were at a Filipino restaurant, music was blasting, and Aquino started singing. A week or so later, Sandoval called Aquino to shoot a pickup scene she’d written in which Trixie sings to Olivia in church, in Tagalog, as they reminisce over their childhoods together and the futures they both yearn for. (The film is primarily in English but also includes voice-overs in Cebuano, Sandoval’s native language.)

It’s among the film’s most affirming moments, exploring a shared experience not only between Olivia and Trixie but also the actresses themselves, who also grew up Roman Catholic in their native Philippines. “Isabel sees two trans women, two trans friends, comforting each other in a church as radical, and I agree with that,” said Aquino. “Despite what religion may say about our existence.”

For Aquino, screening “Lingua Franca” for early audiences was a surreal and touching experience in itself. “It’s such loving validation to be able to see one’s story, and your narrative, in something that’s being celebrated as art,” she said. “There were trans Filipina immigrants coming up to us, saying, ‘Thank you so much, I saw my story on-screen.’ And, wow … there are no words to describe those experiences. As I was listening to these women, I felt myself in their body saying those words. Because their words expressed how I was feeling as well.”

Sandoval says the experience of seeing “Lingua Franca” connect with viewers has bolstered her resolve as an artist, even with three features under her belt. In many ways, it feels like her first film, she says. The notion is reflected in three words that reverberate off the screen: “Introducing Isabel Sandoval.”

“I feel even more emboldened and inspired to take even more risks than I have before,” said the filmmaker, whose next script, “Tropical Gothic,” is a “Vertigo”-esque colonial drama set in 1570s Philippines. “I’ve gotten to this point in my career of just taking the plunge, taking the risk and not really caring about ‘Is this movie going to make a ton of money?’ but ‘Is this movie going to be authentic?’ I wanted ‘Lingua Franca’ to be more authentically myself as a storyteller and as an artist. And I’m going to continue doing that.”

‘I Was Enjoying Dinner Alone on My Favorite Boulder in St. Nicholas Park’

Why the N.B.A. Is Planning on Going to Disney World

For Years, He Was Spank Rock. He’s Always Been Naeem.