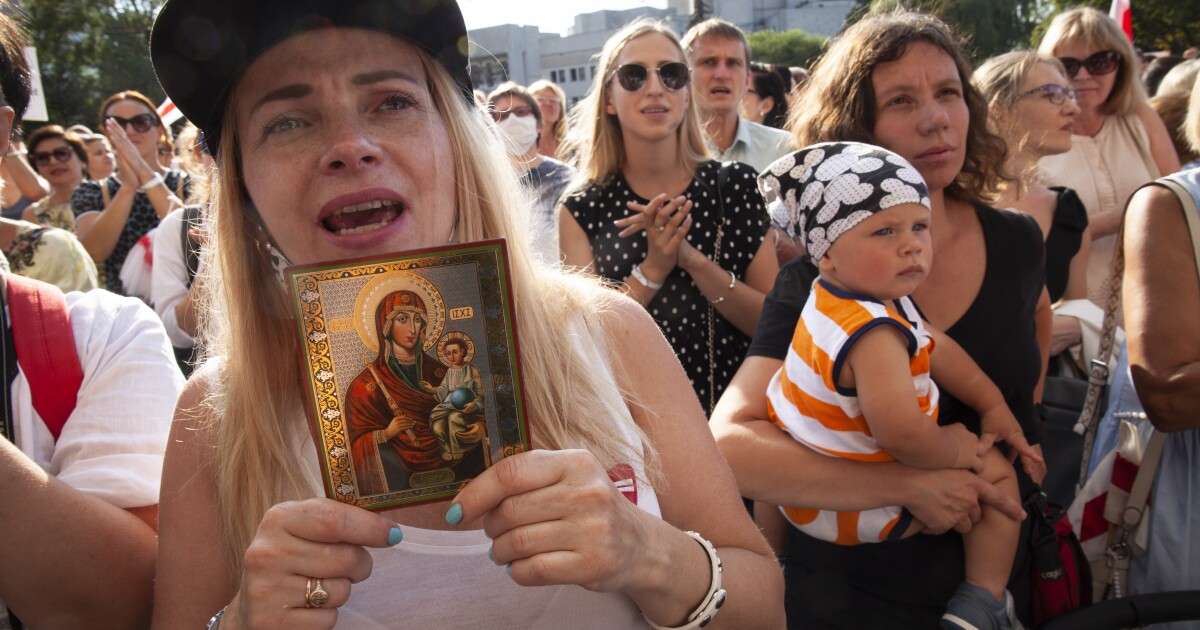 A construction worker, a web designer, a college student, an engineer — these Belarusians had little in common, but human rights activists say they shared a similar fate: abuse, humiliation and, in some cases, outright torture at the hands of their jailers.

Largely peaceful protests erupted last month in the former Soviet republic after authoritarian President Alexander Lukashenko claimed a landslide victory — a fraudulent win, according to the opposition. Thousands of demonstrators were swept up in a wave of arrests.

Now a leading human rights group has compiled one of the most detailed dossiers yet on the ill treatment of hundreds of detainees, some of whom recounted harrowing beatings, electric shocks, squalid jailhouse conditions and sexual abuse in the protests’ early days.

“Is this leg really broken?” a 35-year-old construction worker said jeering riot police asked him as they trampled on and poked his shattered limb.

A 28-year-old woman, who was trapped in a jail cell so tightly packed that the occupants could barely move or breathe, said guards responded to their pleas for more space by dousing them with cold water.

An 18-year-old college student said police broke his nose with a kick to the face, then sliced open his trousers and threatened to rape him with a grenade.

The report by Human Rights Watch, released Tuesday, comes as international agencies such as the United Nations Human Rights Council are preparing to debate events in Belarus, but activists are hoping to spur formal investigations. Although the European Union is readying sanctions, Lukashenko is defying opposition demands that he step aside.

Lukashenko, in power for 26 years, apparently hoped that a harsh crackdown in the protests’ initial phase would terrorize people into staying off the streets. That was a shock tactic that worked in the past, said Katsiaryna Shmatsina, a research fellow at the Belarusian Institute for Strategic Studies — but this time around, it seemingly backfired.

“The initial protest was not that massive,” she said. But the more reports have emerged of abuse in detention centers, “the more people go onto the streets and express solidarity.”

She cited scenarios such as students being detained and beaten — and subsequent outrage over their treatment propelling their parents and professors into the streets.

Scattered accounts of abuse were at first shared among friends and family, or posted on social media. But their widespread and systemic nature quickly became clear, as did the realization that riot police and other law enforcement officers must have been given free rein to put down the protests by whatever means they wished, without fear of punishment.

“The sweeping brutality of the crackdown shows the lengths to which the Belarusian authorities will go to silence people,” said Hugh Williamson, Europe and Central Asia director at Human Rights Watch.

Now, as the opposition scrambles to channel international opprobrium into meaningful action to hold Lukashenko and his government acocuntable, meticulous documentation is helping to build a case that grave rights abuses have been committed.

Human Rights Watch said it interviewed 27 former detainees, 21 men and six women, most of them arrested either just before or in the few days after the Aug. 9 election. The rights group said it also spoke with witnesses and healthcare workers and examined photographs, video and medical records.

Half a dozen of the interviewees were hospitalized after their release, the group said. Some were still bruised, bloodied or in casts and bandages when the interviews took place.

Detainees reported that police — backed up by riot officers known as OMON, or special task force, and special forces, or Spetznaz — “picked them up off the streets, in some cases using extreme violence, then beat them in dangerously confined spaces in vehicles, where they had trouble breathing.”

Many of those arrested had never had any run-ins with police. A 31-year-old financial technology specialist named Kim Mazur told Human Rights Watch that he and a friend were dragged from their car in the capital. Taken to a prison outside Minsk, he was thrown into a truck already filled with detainees, he said.

“You have to crawl like a worm on top of the others while the OMON guys are beating you to go faster,” he said.

The report’s time frame focuses on the protests’ early days, but as the demonstrations have continued, some observers cite a resurgence of violent tactics initially employed by riot police and other law enforcement authorities. At demonstrations last weekend, female protesters appeared to be more of a police target than previously.

Another ongoing means of intimidation, said research fellow Shmatsina, is grabbing random passersby, whether or not they are taking part in demonstrations. “They detain simple strangers who were on their way from work, driving by etc., to make people feel not safe and scared,” she said. But she said it had the “opposite effect.”

Some of those interviewed by Human Rights Watch said they were determined to seek justice for their ordeal.

Pavel Pogartsev, a 20-year-old student, said he was beaten with truncheons and suffered a concussion. An officer crushed his hand, threatening to break his fingers and toes if he refused to say who had coordinated the protests.

The entire experience, he said, left him feeling “braver.”

Mi TV 4 55 Will Not Get Any More Android TV Updates, Says Xiaomi

The Creepy Line selected to APOX film festival in Croatia

‘Hamilton’ The Film Is Dropping This Summer, Just You Wait

With 1-0 lead in series, England name unchanged squad for 3rd Test vs Pakistan

A User’s Guide to Face Masks