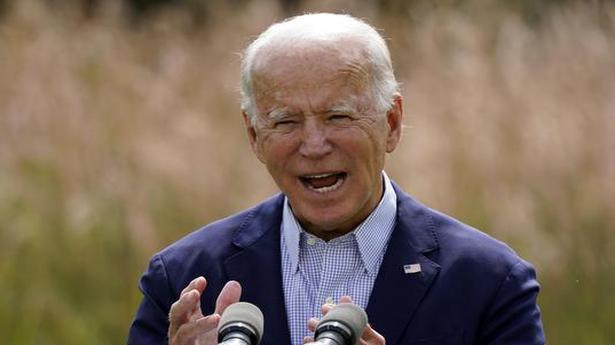 Biden said, if elected, he will not only bring the standards back, but will also set new ambitious ones that American workers are ready to meet.

Democratic presidential candidate Joe Biden has pledged to rejoin the historic Paris Agreement on climate change, if elected to power in the November elections, and set new standards towards reducing carbon emissions.

“While he (President Donald Trump) turned against our allies, I’ll bring us back into the Paris Agreement. I will put us back in the business of leading the world on climate change and I will challenge every other country to up the ante on climate commitments,” Mr. Biden said in a major policy speech on climate change.

“Where he reverses the Obama-Biden fuel efficiency standards, he picks big oil. He picks in big oil companies over American workers, even when the automobile industry agreed,” he said in his address from Delaware.

Mr. Biden said, if elected, he will not only bring the standards back, but will also set new ambitious ones that American workers are ready to meet.

“I’ll also see American workers building and installing 500,000 electric vehicle charging stations along our newly engaged infrastructure programs and highways all across the country. I see American consumers switching to electric vehicles through rebates and initiatives,” he said.

“Not only that, the United States owns and maintains an enormous fleet of vehicles and we’re going to harness the purchasing power of our federal government to make sure we’re buying electric vehicles that are made and sourced by union workers right here in the United States of America. And together, this will mean more than a million new jobs in the American auto industry,” he asserted.

Mr Biden said he will put the U.S. on a path to achieve a carbon pollution free electricity sector by 2035 that no future president can come along and turn back.

“Transforming the electrical sector power to produce power without carbon pollution will be the greatest spur to job creation and economic competitiveness in the 21st century, not to mention the positive benefits to health and the environment,” he argued.

“We need to get to work right away. We’ll need scientists at the national labs and land grant universities, historic black colleges and universities to improve and innovate technologies needed to generate, store, and transmit this clean electric. We need engineers to design and workers to manufacture these new products,” he said.

Asserting that climate change is the existential challenge that’s going to determine America’s future as a country, Mr. Biden said that like the pandemic, dealing with climate change is a global crisis, and that requires American leadership.

“It requires a president for all Americans. So, as the fires rage out West on this day, our prayers remain with everyone under the ash. I know it’s hard to see the sun rise believing today will be a better day than yesterday. Americans face this historic inflection point, a time of real peril but also a time of extraordinary possibilities, he said.”