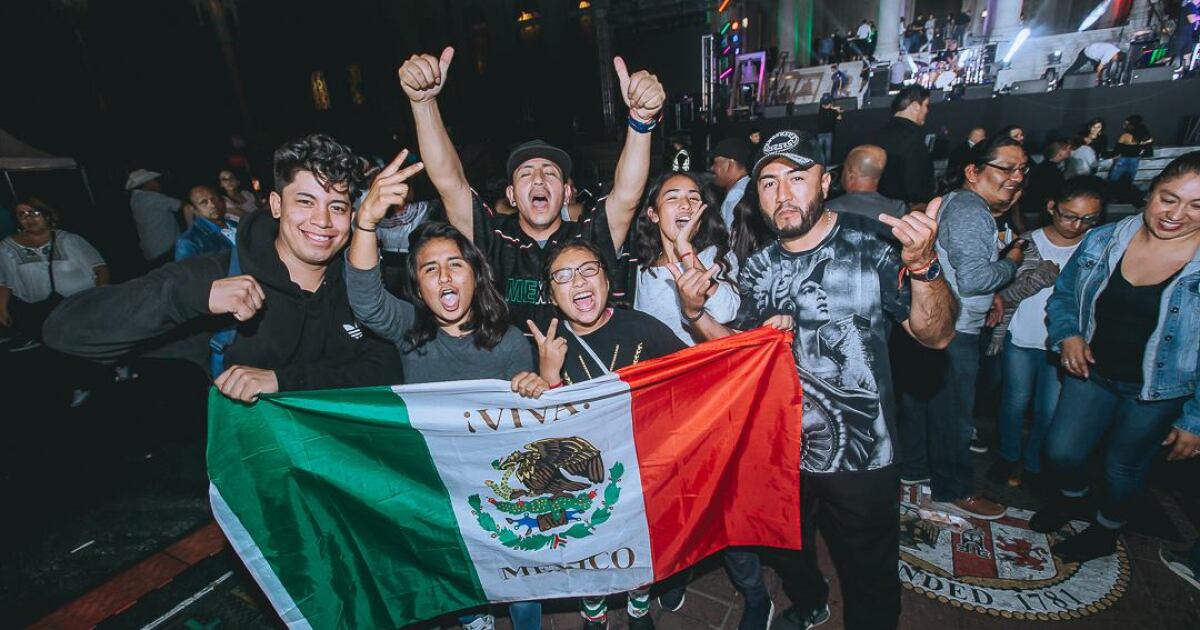 For Latinos, a group that is 3.4 times more likely to test positive for COVID-19 than white people in California, El Grito could not come sooner.

The annual event, which commemorates the 1810 Cry of Dolores — the battle cry of Mexico’s fight for independence from Spain — gives Latinos something to celebrate: both Mexican Independence Day and the start of Latino Heritage Month in Los Angeles.

Typically held on the steps of City Hall, this year’s Grito will mark its first time as a virtual telethon and concert, which will be available Tuesday night as a livestream on ElGrito2020.com.

Because of the ongoing pandemic, all performances were filmed in advance: L.A.-based acts were recorded in the historic El Pueblo area of the city, while Mexican acts such as Los Tucanes sent in video from their studios. The diverse musical act lineup will be followed by a civic ceremony, also prerecorded in El Pueblo.

That civic ceremony will include the Consulate General of Mexico reenacting the historical Cry of Dolores that triggered the Mexican War of Independence, ringing a bell that represents the one that priest Miguel Hidalgo y Costilla rang when he gave the call to arms.

“For me, bringing El Grito and keeping it even during this pandemic, I thought was even more important,” Rodriguez said. “So we came up with this new format as a telethon, to use it as an opportunity to help elevate the profile of the sacrifices that are being made among members of our community, and really help get them the critical resources that they need.”

This year’s virtual telethon and concert will raise money for Comunidades Indígenas en Liderazgo’s (CIELO) Undocu-Indigenous Fund. Audience members can donate directly from ElGrito2020.com or by texting “ELGRITO2020″ to 44-321.

CIELO established the fund at the beginning of the pandemic, when it became apparent that COVID-19 was disproportionately affecting undocumented indigenous people. The organizers are unsure how much El Grito might raise but hopeful for both monetary and food donations for their distribution efforts.

Before joining the City Council, Rodriguez had worked as a City Hall staffer, where the event felt insular and exclusive, she said. She worked to open it up to the public: In 2018, crowds stretched from the steps of City Hall into Grand Park, all the way to Broadway.

“It was for those that preserved that experience and that history that I wanted to make sure we did more of an inclusive event … that it was something where families would come and share in this rich tradition,” Rodriguez said. “And so that’s what we did different in 2018. And Los Angeles responded incredibly.

Rodriguez is the third Latina in L.A.’s history to serve on the City Council — she is a first-generation American of Mexican descent. Her father was a farm worker; she realizes that Black, Latino (including Afro-Latino) and especially indigenous communities are among those hardest hit by the global health crisis.

Zapotec grassroots organizer Odilia Romero, who founded CIELO along with Janet Martinez, was elated when the councilwoman’s office reached out.

Sure, she said, the City Council has recognized Oaxacan Heritage Month, but this “is the first time that there’s a specific campaign and a specific councilwoman to attend to the needs of indigenous people and to acknowledge our existence and our rights.”

Indigenous communities often intersect with Mexican and Central American groups in L.A. but continue to be overlooked and underserved. El Grito, however, is for everyone: Zapoteco, Quiche, Mixe, Chicano and Latino communities alike.

“It really celebrates the Mexican independence, but we also are inclusive of all the other Latin American countries that are celebrating their independence,” Rodriguez said. “Really, it’s a shared experience of doing the extraordinary.

“When you think about what El Grito represents: It was a call to action and a call to arms amongst average people, everyday people. And they fought and sought their independence,” Rodriguez continued. “Given what our community is enduring … that same moment exists for all of us today: to take that ringing of the bell and that moment as a reminder that we are not powerless.”

The civic ceremony represents perseverance and the fight for “respect and dignity,” she said. The councilwoman is particularly excited about the involvement of Marcela Celorio, the first female Consul General of Mexico appointed to L.A.

“To have a woman Consul General, and for us to do this civic ceremony and having a woman do the Grito, I think is emblematic of the power of Latinas,” Rodriguez said.

This year, the ringing of the bell itself will be filmed on the original street of Los Angeles, in Olvera Plaza. (The family of Marisol Hernandez, the lead singer of La Santa Cecilia, also happens to be a vendor in the plaza.)

The women of CIELO, for their part, are eager to increase the visibility of indigenous people in the Latinx community through El Grito.

“I think that sometimes, being Latino, Latina, Latinx, it’s very general, and we don’t really see the diversity and the nuance of it,” co-founder Martinez said. “I think that this is a good opportunity to maybe bring visibility to the indigenous community here in Los Angeles.”

Tennessee Woman Gets Most Inaccurate Driver’s License Photo Ever

Too Much Oil: How a Barrel Came to Be Worth Less Than Nothing

25 years of Disney musicals on Broadway: Your quarantine must-watch of the day

Cancer, Religion and a ‘Good’ Death