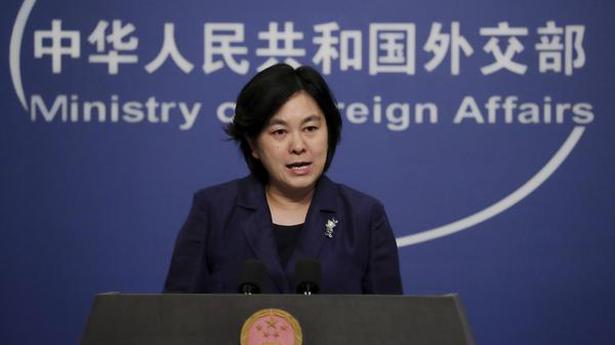 China on Wednesday said “the responsibility lies entirely with the Indian side” for the continuing tensions along the Line of Actual Control (LAC) and a new standoff in the Chushul sector.

India’s Ministry of External Affairs (MEA) said on Tuesday the Chinese troops engaged in “provocative action” on August 31, while discussions between ground commanders were on-going. This followed earlier moves on the night of August 29 which, the Army said, were ‘provocative’ military movements to change the status quo. To pre-empt these moves, the Army said, India undertook measures “to strengthen our positions” near the south bank of Pangong Lake in Ladakh.

On Wednesday, China’s Foreign Ministry spokesperson Hua Chunying said to a question on the current situation there, “You just said that the Indian side pre-empted China’s action. In China we have a saying about a guilty mind protesting conspicuously he’s innocent. That is what India did. It shows that the Indian troops illegally crossed the line in provocation and unilaterally changed the status quo and broke the two sides’ agreement and consensus.”

Ms. Hua said: “From the beginning of this year, the Indian Army repeatedly broke consensus and agreements and unilaterally with force changed the status quo, destabilising the border region and causing tensions”. “The responsibility lies entirely with the Indian side,” she said.

“China has exercised great restraint to avoid escalation. Communicating through diplomatic and military channels, China urged the Indian side to discipline frontline troops, stop provocation, pull back illegal trespassers and stop actions leading to escalation and complication. We hope India will work together with China for the same goal, implement the leaders consensus and the two sides agreements and work with concrete actions to contribute to peace and tranquillity along the border.”

India has said the latest tensions on the south bank of the Pangong Lake followed China’s similar moves along the the border since early May, where it has sought to redraw the LAC in the Galwan Valley, Depsang Plains, north bank of Pangong Lake and in the Gogra-Hot Springs area, in addition to mobilising large number of troops.

A clash in the Galwan Valley on June 15 claimed the lives of 20 Indian soldiers and an unknown number of Chinese soldiers.

Asked on Wednesday by Reuters to comment about reports that a Tibetan officer part of India’s Special Frontier Force had died on August 29 in a landmine blast near the site of recent border tensions and on the presence of Tibetan officers in India’s Special Frontier Force going back to the 1960s, Ms. Hua said: “You were talking about whether there are Tibetans-in-exile in Indian troops. I’m not aware of that, perhaps you can ask your colleague in India to ask the Indian side. You mentioned the 1960s [and the role of] the CIA and Tibetans-in-exile. These are thought provoking words. We need to think about the Tibetan issue, and the ins and outs and role of the United States. China’s position is very clear. We oppose any country, of course that includes India, to provide any facilitation or venue to forces advocating Tibet independence. As to the relationship between Tibetans in-exile and in Indian troops, I am also very curious. If you could get more information with your report, I would appreciate that.”

On Wednesday, the Communist Party-run Global Times, in an editorial published in its English and Chinese editions, said “the system that has managed the border situation for decades is now crumbling” and “regular border frictions will exhaust both countries”.

“India’s actions have seriously increased the strategic mistrust between China and India and heightened the damage border frictions are creating on relations between the two countries. India has cancelled much cooperation with China since Galwan Valley clash. Its nationalism is inflicting damage to itself,” the editorial said.

“Neither China nor India is willing to keep their relations at the cost of losing territory. But the same disputes have been there for decades, and they shouldn’t have been allowed to resurface. Chinese public opinion hasn’t focused on the China-India border issues, but India has always been fanatical. One will suspect that India is misguided,” the newspaper added.

“China is an immovable neighbour and much stronger than India. The two countries are suitable to be partners in seeking common development. But if New Delhi wants to label Beijing its long-term strategic rival, it needs to be prepared to pay a huge cost. In the meantime, it will never manage to get one more inch of land at China-India border areas.”

Spreading Wildfires in California Have Killed 4

There are now 70 coronavirus vaccines in development, as the race to find treatments also gathers pace

Behold Vermont, From Above

The Week in Business: The Fight Over Inflammatory Language