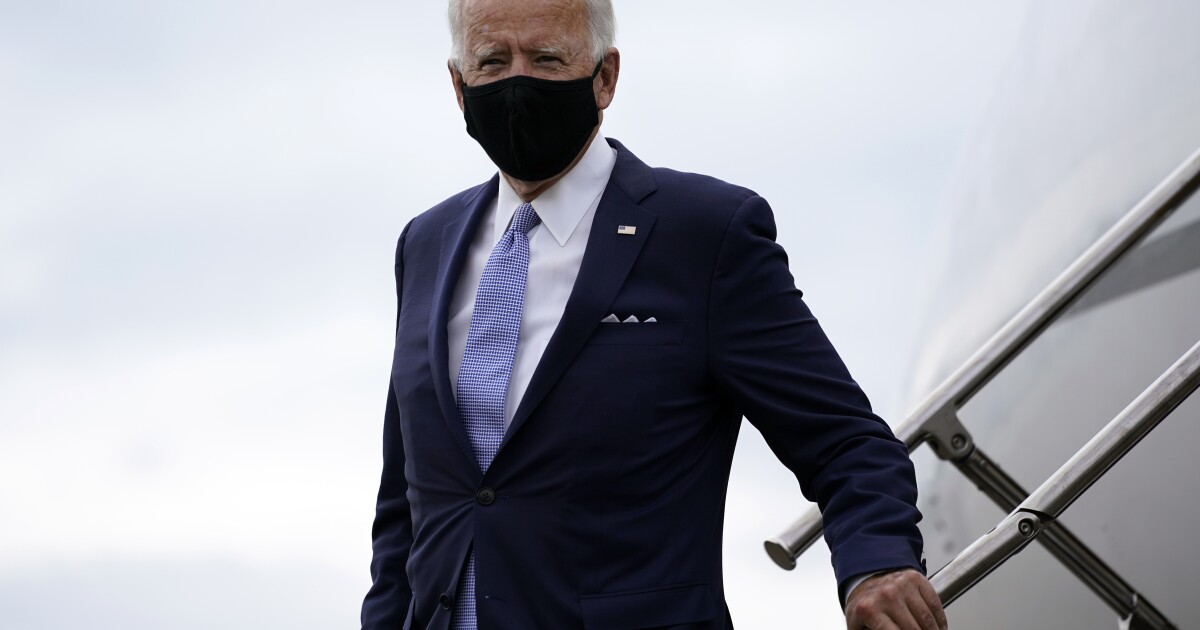 A day after President Trump landed in Kenosha to pledge support for police and decry “anti-American riots,” Joe Biden said he would visit the embattled city in his first campaign stop in Wisconsin since securing the Democratic presidential nomination.

Trump, who visited Kenosha more than a week after protests broke out over the police shooting of Jacob Blake, did not meet with the Blake family on Tuesday and said he refused a phone call with the family because they wanted lawyers present.

The president toured businesses destroyed amid fires that burned during downtown rioting early last week and spoke with local law enforcement to describe protests, which have remained largely peaceful for six days, as “acts of domestic terror.”

It was unclear if Biden would visit damaged sites near downtown Kenosha or meet the Blake family, with whom he has spoken via phone.

The Wisconsin residents contend authorities arrested 150 protesters for violating the curfew put in place after Blake’s shooting but ignored pro-police demonstrators, according to the lawsuit filed in the Eastern District of Wisconsin.

“In Kenosha, there are two sets of laws — one that applies to those who protest police brutality and racism, and another for those who support the police,” it said.

On Wednesday afternoon, Kenosha Mayor John Antaramian said the curfew has been lifted because “the last several nights have been relatively peaceful.”

Kimberly Motley, the attorney representing the suing protesters, said earlier that she was concerned about how police would respond to changes if the curfew was adjusted. “What they do tonight — we’ll see,” she said.

The suit seeks a temporary restraining order that would bar officials from enforcing the curfew while the case works its way through the courts.

City and county officials did not return calls Wednesday.

Kenosha County Sheriff David Beth has insisted that most of those arrested since the Blake shooting were not from Kenosha. As of Sunday, of 175 people arrested, 73 were from Kenosha, while the rest came from 44 other cities, mostly in Wisconsin, according to booking records.

“They’re arbitrarily applying those curfew violations to people who are protesting police brutality, not white supremacists,” Motley said. “You would think they would find value in also charging the pro-police people who are coming there armed after two people were murdered,” she said in reference to Kyle Rittenhouse, a 17-year-old Illinois resident charged in the shooting deaths of two people near downtown on Aug. 25.

More than 1,000 National Guard troops from Wisconsin and other states, as well as federal law enforcement, are now in Kenosha, which has a population of 100,000. Trump has claimed credit for sending in the Guard, although it arrived in the city at the request of Gov. Tony Evers.

During his Kenosha stop, Trump, who has painted Biden as weak on crime and positioned himself as a “law and order” president, described bad policing as the act of “bad apples” and declined to answer questions about complaints of racism in law enforcement. Biden has condemned violence that has hit American cities since the death of George Floyd under police custody in Minneapolis. He has also spoken out in support of reforms to policing.

In a statement after Trump’s visit, Biden criticized Trump for not offering a “condemnation of violence of all kinds, no matter who commits it,” alluding to Trump’s defense of Rittenhouse.

Rittenhouse, who police said fled the scene of the shootings, was arrested Aug. 26 and is being held in Lake County, Ill. His lawyers said he acted in self-defense, an argument Trump repeated this week.

Blake, 29, is paralyzed in a Milwaukee hospital. Family members have spoken at several marches in the last week in Kenosha and Washington to call for the officer who shot him in the back seven times to be charged and fired.

Before the shooting, three officers attempted to arrest Blake after responding to an Aug. 23 call about a domestic dispute. They are now on leave as state and federal officials investigate.

Realme 7 Pro to Go on First Sale Today at 12 Noon via Flipkart, Realme.com

What’s on TV This Week: ‘Star Wars: The Rise of Skywalker’ and more

In the End, ‘Little Fires Everywhere’ Burned Down the Status Quo

Playing Jesus in a Pandemic Summer