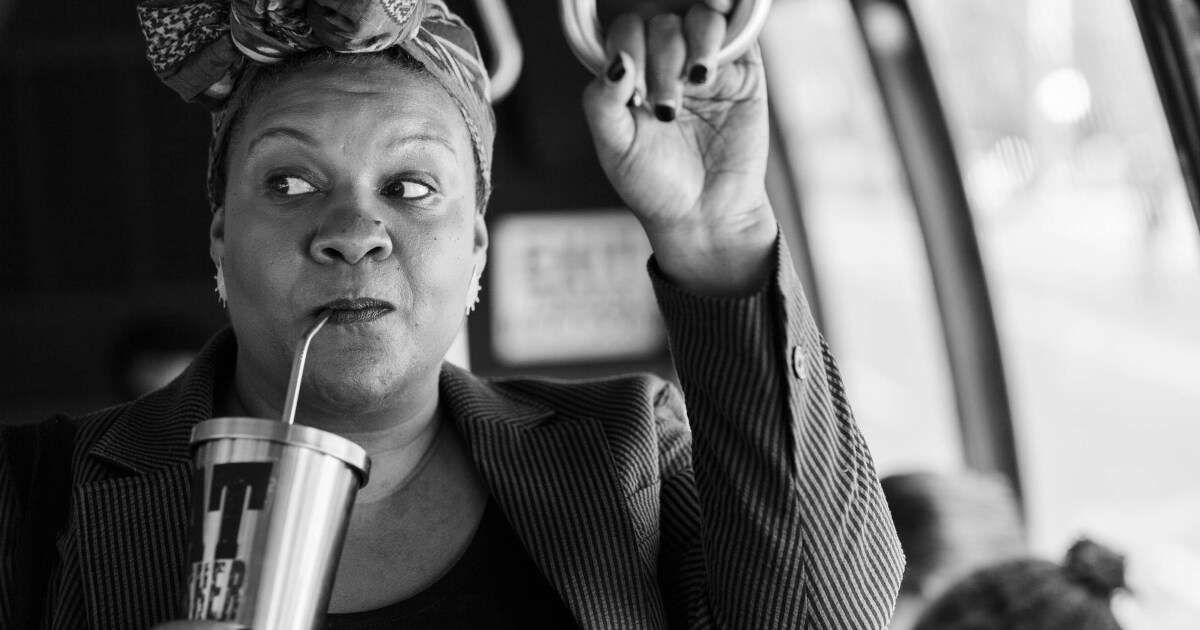 It doesn’t seem accidental that “The Forty-Year-Old Version,” a bracingly personal fiction from writer, director and actor Radha Blank, opens in a darkened bedroom. For Radha, Blank’s on-screen alter ego, this little corner of Harlem offers a cocoon-like refuge, a place where she can sleep away her worries and pursue her art in relative peace. Not that the pursuit has been going well for the struggling playwright fast approaching her 40th birthday. The sunlight peeking through her curtains signals another day of mild promise and likely disappointment, one that begins with a few minutes of lazy channel surfing and the enviable sounds of her next-door neighbors’ lovemaking.

You might flash (ever so briefly) on “The 40-Year-Old Virgin,” which starred Steve Carell as an even more sexually frustrated quadragenarian, mainly because of the punny riff on the title. But its truer companion is Spike Lee’s “She’s Gotta Have It” (1986), a rather different sex comedy that introduces its young heroine, Nola Darling, sitting up in her own bed and boldly seizing control of her narrative. Like Lee’s movie, “The Forty-Year-Old Version” is a sharp debut and a funny, movingly specific New York valentine, gorgeously shot on black-and-white film by a director who navigates the city and the medium with equal ease. (That Blank wrote a few episodes of Netflix’s recent “She’s Gotta Have It” series spinoff only reinforces the connection.)

But Radha is older, wearier and more beaten down than Nola, and she takes a while longer to take ownership of her story. Watching her figure out exactly how to do it — as she makes her way around New York with a determined stride and (invariably) a diet smoothie — is the movie’s purpose and pleasure. That bedroom will continue to play a part: It’s where Radha keeps an old playwriting trophy, now a discouraging reminder of unrealized promise, as well as a photograph of her recently deceased mother, a visual artist. It’s also where Radha stays up late honing her craft, whether that means rapping in front of a mirror or hammering away at the play she’s been writing for years.

Nola juggled three men; Radha moves among three artistic spaces, each one significant. The first is the classroom where she teaches drama to a bunch of high-spirited high schoolers, steering them through the process of writing and producing their own play. Embodied by a group of irrepressible young actors (Haskiri Velazquez, Imani Lewis, Antonio Ortiz and TJ Atoms), her students serve every possible narrative function: They’re her comic relief, support squad and occasional smack upside the head. Given her setbacks and failures, does Radha even have the right to call herself an artist, let alone rear a younger generation of them?

Of course she does, even if the world doesn’t always agree. Radha’s second space is the rarefied world of New York theater, which threw her a bone years ago but now has little use for her talents — not even amid a greater push for diversity, which mostly results in bankable-sounding crap like an all-female revival of “12 Angry Men.” That high-concept production is the brainchild, if that’s the word, of a condescending theater producer named J. Whitman (Tony winner Reed Birney, giving a master class in smarm). He takes one look at Radha’s long-gestating play, a realistic portrait of a Black couple living in a fast-gentrifying Harlem, and suggests a number of alterations to make it more accessible to a white audience.

The bitter irony of that development — the gentrification of a play about gentrification! — is almost too on the nose. But it does allow Blank to land some delicious blows, physical as well as satirical, against the many, many Whitmans (white men?) in her field. It’s all frustrating enough to drive Radha back into the arms of an old musical passion, as she considers abandoning theater and becoming a rapper instead. In this third space, she hopes to funnel her disappointments into free-flowing beats and rhymes, and also to feel authentically grounded, for a change, in a strong community of Black artists.

The reality turns out to be a lot more complicated — and also a lot funnier and sadder. Radha’s plunge into the hip-hop world leads her all over New York, from a Bronx boxing ring where female rappers go ferociously head-to-head to a Brooklyn club where, despite her skills, she is confronted once more with the sting of failure. It’s there too that she begins recording a mixtape with a gruff but sensitive DJ (Oswin Benjamin), whose interest in her, personal as well as professional, is one of the script’s generally effective concessions to romantic-comedy formula. Another is Radha’s talent agent and closest confidant, Archie (a winning Peter Kim), who is both a shrewd, affectionate riff on the gay best friend trope and a welcome fount of tough love.

Eager to get Radha’s play produced, Archie sees in Whitman an odious but desirable ally, and he tries to convince his friend that success always demands a measure of compromise. The sly achievement of “The Forty-Year-Old Version” is to turn a critical eye on the very idea of success (by whose standards?), and to ponder exactly what level of compromise is acceptable to secure it. It pains Radha to see her work diluted and sensationalized for the clucking patrons and self-appointed gatekeepers of the theater world. But as the movie makes clear, the ostensibly more authentic, ground-level world of hip-hop isn’t necessarily a better fit for Radha, whose artistic identity turns out to be an intricate, messy weave of both.

Blank the filmmaker has her own rich trove of influences, Lee chief among them, though she has also acknowledged other New York directors including Woody Allen, John Cassavetes and Sidney Lumet. Her monochrome vision of the city feels like both a present-day snapshot, teeming with person-on-the-street energy, and an elegiac throwback, thanks to the work of the cinematographer, Eric Branco, whose widescreen compositions are as elegant here as they were in last year’s “Clemency.” Every so often, the movie will throw in a warm burst of color, a playful visual touch that vibrantly expresses the blurring of Radha’s life and her art.

The logline for “The Forty-Year-Old Version” — struggling playwright seeks to reinvent herself as rap artist — is enough to provoke, if not an eye roll, then at least a wearying preconception of how the movie will end: in the spotlight, of course, where the two poles of Radha’s art will fight each other to the death, cancel each other out or somehow triumphantly converge. But Blank skirts inspirational-underdog clichés as deftly as she skewers the trappings of racial and cultural privilege. And she makes clear that wherever Radha ends up — whether she successfully leaps through the culture’s designated hoops or gives up being an artist altogether — is ultimately less meaningful than the complex, irreducible reality of who she is.

Radha may struggle to project authenticity in her writing, but nothing we see of her ever seems less than authentic. Her talent for rapping wells up from a palpably real place, but so does her knack for self-deflating humor; she effortlessly elicits laughs, sometimes to defuse tension and sometimes to stifle her own tears. But where does authenticity end and artifice begin? The character may be an on-screen projection of Blank’s own foibles, aspirations and gifts, but that doesn’t make her an exacting self-portrait. There are details here — notably the head-scarf she wears in almost every scene — that are pointedly left unexplained, both as to their significance and their origin.

It would be a mistake, in other words, to see “The Forty-Year-Old Version” purely as a soul-baring autobiographical exercise. Success doesn’t come easily to Radha , but Blank has already enjoyed a well-earned measure of it off-screen: Netflix acquired her film at this year’s Sundance Film Festival, where Blank walked away with a directing prize. A movie that makes strides for Black female artists by critiquing the very obstacles they face? That’s the kind of uplift that might elicit Radha’s skepticism and yours, which doesn’t make it ring any less true.

Rating: R, for pervasive language, sexual content, some drug use and brief nudity

Why Bruce Hornsby Continues To Get Hate Letters