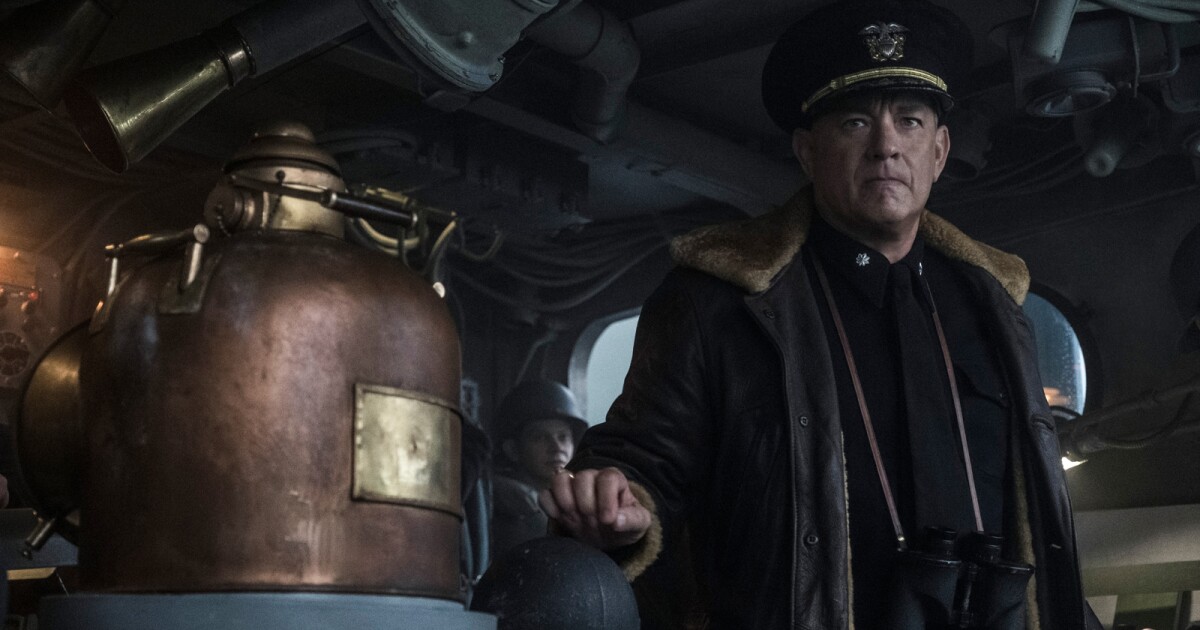 Labeling someone as capable may seem like faint praise, but in the case of many of the characters in the Tom Hanks pantheon you could say it is a requisite trait. Astronaut, Army Ranger, Cold War attorney, airline pilot, even Mister Rogers — all exhibit degrees of discipline and attention to detail that beget results.

It’s easy to see the appeal of capability as an access point for an actor such as Hanks. These characters often wind up heroes, but at heart they are men who know and understand the tools of their trade. Hanks is, after all, a man who enjoys the fine lines and precision of a good typewriter. He appreciates craft.

Commander Ernest Krause, Hanks’ role in the tense new World War II nautical drama “Greyhound,” is indeed capable, but he is also shadowed by doubt. A career Naval officer, Krause finally receives his first command in the wake of the United States’ December 1941 entry into the war. Within two months, he is at the helm of a Fletcher-class destroyer nicknamed Greyhound.

Adapted by Hanks from the novel “The Good Shepherd” by C.S. Forester, best known for the Horatio Hornblower series and “The African Queen,” the film is the first of the actor’s feature screenplays — following “That Thing You Do” and “Larry Crowne” — that he did not himself also direct, with filmmaker Aaron Schneider (“Get Low”) taking command here.

In a way, it’s a classic wagon train movie — a western on the high seas — with Greyhound and three other destroyers escorting 37 Allied troop and supply ships across “The Black Pit,” a notorious stretch of the north Atlantic outside the range of air support. Krause is the wagon master, charged with commanding the entire convoy.

In the first two years of the war, German U-boats targeted Britain’s crucial oceanic supply chain, resulting in heavy losses, making Krause and Greyhound’s mission a perilous one. It’s a war with which Hanks is familiar, after starring in “Saving Private Ryan,” and writing and producing the miniseries “Band of Brothers” and “The Pacific.”

Hanks’ script is spare and economical. We learn little of Krause or the men in his command. The dialogue is spartan, prudently focused on commands and maneuvers, with the men’s actions telling us all we need to know about their character.

Krause is pious (in the book, he’s the son of a Lutheran minister) and merciful. He prays regularly and quotes the Bible when meting out discipline. A flashback early in the film briefly introduces Evelyn, played by Elisabeth Shue, the woman he loves.

Onboard the ship, Krause is methodical and relies on his executive officer Charlie Cole (Stephen Graham), steadied by the experience etched on the XO’s seaworthy face. Hanks and Graham exchange volumes through looks and glances as Krause’s apprehension threatens to undermine his command.

Schneider’s direction is taut, limiting much of the action to the confined spaces of the ship’s bridge and its vantage points. The close quarters ratchet up the tension and intimacy of a space where everyone can see you sweat.

The vastness of the icy Atlantic, its crashing waves and turbulent skies are rendered dramatically by cinematographer Shelly Johnson, evoking the roiling seascapes of J.M.W. Turner. Blake Neely’s ominous, howling score plunges the film immediately into the danger zone, often with a subtlety only sonar can detect.

While the film’s brevity is an advantage — this is one lean voyage — a subplot involving a Black sailor named Cleveland feels underdeveloped. Casting an actor of Rob Morgan’s caliber sets certain expectations and those go largely unfulfilled, leaving the impression that something is missing.

“Greyhound,” however, is an efficient, satisfying war film. In that regard, it’s a fresh telling of familiar elements, buoyed by the powerfully understated performances from Hanks and his fellow cast members, including Shue, Graham, Karl Glusman and Tom Brittney.

Given its somber, melancholic tone and the uncertainty around when theaters will be screening big new releases again,, it’s understandable that Sony opted to go the digital route in selling “Greyhound” to Apple TV+, but it would have been an especially good film to experience on the big screen in an auditorium with the air conditioning cranked up. Disney’s ‘Mulan’ under fire again, days after #BoycottMulan flared up

Trump Is Covering For Russia. A Homeland Security Whistleblower Adds To The Evidence. Documentary on Rajamma is an ode to her resilience and independence, says director Sunitha CV

One technique for staying upbeat during the pandemic