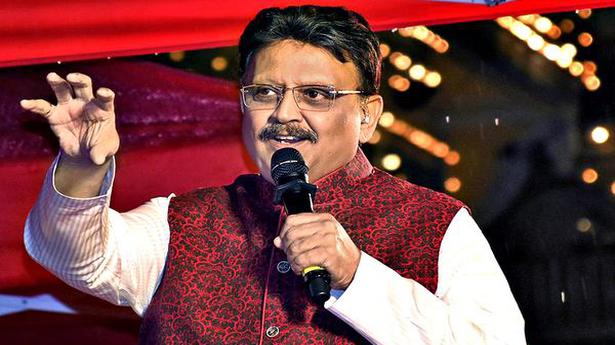 Legendary playback singer S.P. Balasubrahmanyam passed away at a private hospital in Chennai on Friday. He was 74.

Popularly known as SPB, Balasubrahmanyam made his singing debut in 1966 with Telugu movie Sri Sri Sri Maryada Ramanna. He has sung over 40,000 songs in as many as 16 languages including Telugu, Tamil, Malayalam, Kannada, and Hindi.

‘Paadum Nila’ (Singing Moon) as he was called by his fans had a lilting voice with the finest traces of great singers.

Governor Arif Mohammed Khan in a tweet said Balasubramanyam as a musician, composer and actor in five languages, enthralled the national audience, immortalising the role of Music as universal language of mankind.

“I express my heartfelt condolences,”Mr, Vijayan said in a message.

His songs had his signature style,” he added.

SPB will forever remain in our memories through his melodious voice, unparalleled compositions: Amit Shah

Union Home Minister Amit Shah on Friday expressed grief over the demise of SPB and said he would forever remain in people’s memories through his melodious voice and unparalleled music compositions.

“Deeply saddened by the passing away of legendary musician and playback singer Padma Bhushan, S. P. Balasubrahmanyam ji. He will forever remain in our memories through his melodious voice & unparalleled music compositions. My condolences are with his family & followers. Om Shanti,” Mr. Shah tweeted

Deeply saddened by the passing away of legendary musician and playback singer Padma Bhushan, S. P. Balasubrahmanyam ji. He will forever remain in our memories through his melodious voice & unparalleled music compositions. My condolences are with his family & followers. Om Shanti

In his message, the MoS said Balasubrahmanyam was a colossal talent who left an indelible mark in Indian music.

“He lent his voice in many languages and took an active part in nurturing and producing talent. He was a mentor to many aspiring singers. Om Shanti to his atma and condolences to his family,” Mr. Kishan Reddy said.

Praising SPB’s stellar contributions as a playback singer, composer and actor, the Chief Minister, in a message, said the void created by his death can never be filled.

It was unfortunate that the best efforts put in by the doctors to save his life did not succeed, Rao said and conveyed his condolences to members of the bereaved family.

“The devastating news of the passing away of the legendary playback singer, S.P. Balasubramanyam has left me shattered and shell-shocked. I am benumbed and words fail me as I struggle to express my deep anguish. Like millions of people across the globe, my wife, Ushamma and I, prayed fervently for his speedy recovery. We hoped that he would win this battle against the dreaded Coronavirus. Alas! The cruel hand of destiny has snatched away ever-smiling Balu from us.

I wake up every morning and get rejuvenated by listening to Annamacharya Keertans and devotional songs of late Sri Ghantasala Venkatasewara Rao and Sripathi Panditharadhyula Balsubramanyam. This has been my routine for many years. The words that Balu is no more has left a void in me. How can my morning routine be the same without listening to your mellifluous voice, Balu?” writes Vice President M. Venkaiah Naidu.

You have been my voice for many years: Rajinikanth

Rajinikanth shared a video on social media along with the message, “#RIP Balu sir … you have been my voice for many years … your voice and your memories will live with me forever … I will truly miss you …”

Akshay Kumar shared a picture from when he spoke to SPB at a virtual concert, and wrote, “Deeply saddened to hear about the demise of Balasubrahmanyam ji.Just a few months back I’d interacted with him during a virtual concert in this lockdown..he seemed hale,hearty & his usual legendary self…life is truly unpredictable. My thoughts & prayers with his family #RIPSPB (sic).”

Deeply saddened to hear about the demise of Balasubrahmanyam ji.Just a few months back I’d interacted with him during a virtual concert in this lockdown..he seemed hale,hearty & his usual legendary self…life is truly unpredictable. My thoughts & prayers with his family#RIPSPB pic.twitter.com/NytdM7YhBL

“In the passing of music legend SP Balasubrahmanyam Indian music has lost one of its most melodious voices. Called ‘Paadum Nila’ or ‘Singing Moon’ by his countless fans, he was honoured with Padma Bhushan and many National Awards. Condolences to his family, friends and admirers,” Rashtrapati Bhavan tweeted.

Vice President M. Venkaiah Naidu too tweeted. “Shocked at the tragic demise of the legendary musician Shri S.P. Balasubrahmanyam. He leaves a void in the world of music that is virtually impossible to fill.”

Our cultural world is a lot poorer: Modi

“With the unfortunate demise of Shri SP Balasubrahmanyam, our cultural world is a lot poorer. A household name across India, his melodious voice and music enthralled audiences for decades. In this hour of grief, my thoughts are with his family and admirers. Om Shanti,” Prime Minister Narendra Modi tweeted.

Odisha Chief Minister Naveen Patnaik also mourned his death. “Deeply saddened to hear about the passing away of legendary playback singer #SPBalasubrahmanyam. The music lovers will forever miss his euphonious voice. My thoughts and prayers are with the bereaved family members and millions of fans,” he tweeted.

His legacy will be remembered for seven generations to come: Kamal Haasan

Actor Kamal Haasan, in an audio-visual message expressed his condolences over the death of veteran singer S.P. Balasubrahmanyam.

In a one-minute video, Mr. Haasan praises Mr. Balasubrahmanyam and thanks him for sharing his voice with him. The video also features clips of both artistes sharing moments together.

“There are very few great artists who receive accolades and fame that fittingly celebrates their talent, during their lifetime. S.P. Balasubrahmanyam was one of them. I had the privilege of having been the image on screen, to several songs that he has sung. In several languages, he has been the voice of four generations of heroes. His legacy will be remembered for seven generations to come,” Mr. Haasan said.

Coronavirus could be catalyst to reinvigorate virtual reality headsets

Going Up? Not So Fast: Strict New Rules to Govern Elevator Culture

IPL 2020: Rashid Khan accidently clashes with Abhishek Sharma, gets injured but continues to bat for SRH

Amazon Sued After Warehouse Worker Gets COVID-19 In US