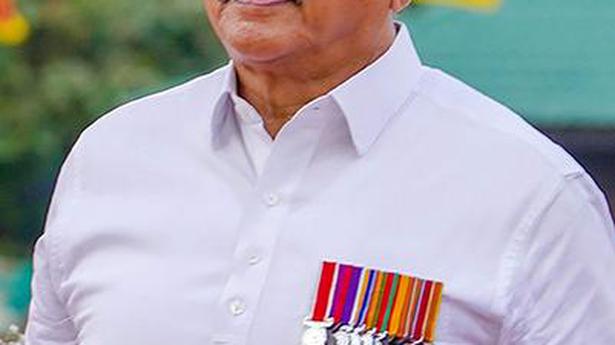 Jayanath Colombage headed the Sri Lanka Navy between 2012 and 2014, and since November last year, he has been the foreign affairs advisor to President Rajapaksa.

The Sri Lankan government on Friday appointed ex-commander of the Navy Admiral Jayanath Colombage as the new Foreign Secretary, days after the new Cabinet took the oath with President Gotabaya Rajapaksa retaining the key defence ministry.

Mr. Colombage, 62, replaces Ravinatha Aryasinha, a career foreign service officer. He headed the Sri Lanka Navy between 2012 and 2014, and since November last year, he has been the foreign affairs advisor to President Rajapaksa.

This is the first time that a non-foreign service person has been appointed as the Secretary to the Foreign Ministry.

Mr. Colombage is one of the four ex-military officers appointed by the President to key positions in the bureaucracy after the Rajapaksa-led Sri Lanka People’s Party (SLPP) won a landslide victory in the parliamentary elections held on August 5 that allowed the influential family to consolidate power for the next five years.

The SLPP won a record 145 seats in the 225-member parliament.

The Secretary is the chief financial officer of a ministry with overall responsibility to its functioning.

Since Mr. Rajapaksa assumed the Presidency, many ex-service personnel have been picked for key positions.

President Gotabaya administered the oath of office to the 28-member Cabinet which is two less than the 30 allowed by the Constitution on Wednesday. He retained the Ministry of Defence while his elder brother and Prime Minister Mahinda Rajapaksa were assigned finance, urban development and Buddhist affairs ministries.

Mr. Colombage served the Sri Lanka Navy for 36 years and retired as the Commander of the Navy in 2014. Under the repatriation programme initiated by him, nearly 19,000 stranded Sri Lankans were repatriated from 94 countries.

Meanwhile, Sri Lanka’s oldest political party, the United National Party (UNP) which suffered a humiliating defeat in the parliamentary election has put the issue of appointing a new leader in limbo despite expectations that former prime minister Ranil Wickremesinghe would step down.

A party statement has said that it will appoint a young leader from among those who have been identified or would voluntarily come forward to take over the leadership.

Mr. Wickremesinghe, who led the party since 1994 and has been blamed for a string of electoral defeat, is hanging on to the leadership.

The UNP, for many years the main opposition party, was reduced to just 2% of the national vote in the election. It did not win a single seat from each of the 22 electoral districts and Mr. Wickremesinghe too was ousted from parliament for the first time since 1977.

His former deputy Sajith Premadasa’s new party won 54 seats with the help of its Tamil and Muslim minority allies and now sit as the main opposition party. Mr. Premadasa broke away after he lost the November presidential election to President Rajapaksa.

U.S. implicates Honduran president in drug trafficking as it seeks his help on immigration

WHO acknowledges ‘evidence emerging’ of airborne spread of COVID-19