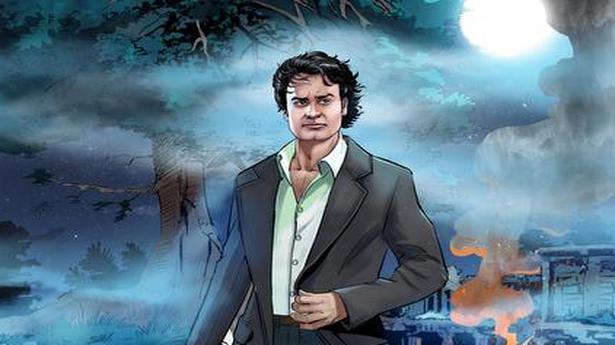 He is not your run-of-the mill detective: he does not don a deerstalker cap nor does he smoke a pipe.

A dhoti–kurta is completely out of the equation. He is just another suave, social young man whose determination trumps all conjecture.

Detective Boomrah, until very recently, resided only in the imagination of storyteller Sudhanshu Rai and the many listeners who track his stories (told in Hindi) on social media. He has now taken a physical form, with an uncanny resemblance to his creator.

The Invisible Man, the latest narrative that Detective Boomrah is part of, will be released by the creator in segments of four to five episodes on YouTube and social media platforms.

Speaking of the evolution of the character, Sudhanshu says, “A year ago, we were discussing the kind of characters the Indian audience was missing out on. The detective genre in India for instance, has not seen many experimentations.” A narrative belonging to a crime or thriller genre most often sticks to a murder mystery, says Sudhanshu, most of whose stories fall under the genres of horror, thriller and science fiction.

While devising the character, it was decided that he should match global standards. “We did not want him to be ordinary. We wanted to create a relatable character who can touch upon unusual horizons that people have not tried of late, including parallel universes, dreams and time travel. If required, he should be able to fight as well.” The idea was to bring in a fresh perspective to oft-heard detective stories.

Listening to a detective story is very similar to watching a movie, says Sudhanshu. The only difference is that the movie is one person’s imagination. “It is not traditional storytelling. A lot of descriptions and works that add a visual quality to the story are used,” says Sudhanshu.

Detective Boomrah first came to light in a seven-minute-long mystery, and has since appeared in more than 50 of Sudhanshu’s stories. For instance, The Dark House is a story of a mysterious, abandoned hut which Boomrah finds out to be an alien spaceship that has been stationed for years. The detective has done everything from nabbing a psychotic serial killer to exposing a supernatural entity that follows a group of people into a casino. The Horror Of The Nuambi Village delves deeper into sci-fi by looking at a facility that houses genetically modified animals.

The Invisible Man will be released in episodes through August. The story is based in a small mountainous town that remains cold for most days in the year. A mysterious man appears to stare at people through their windows. The suspense builds when people from those houses go missing or kill themselves, and Detective Boomrah visits the town to solve this mystery. A collection of these stories will be adapted as a web series within the next six to seven months.

“We have already initiated talks with all the OTT platforms and are currently in the process of deciding the cast,” adds Sudhanshu who will direct and write for the series, which is still in its initial stages. “We hope to start shooting within 30 days of the pandemic situation getting better.”

Until then, Boomrah will continue to solve mysteries from the comfort of Sudhanshu’s YouTube channel.

Listen to The Invisible Man on the YouTube channel: Kahanikaar Sudhanshu Rai through the month of August.

Britain is launching e-scooter trials ahead of schedule. These are the start-ups racing to take part

Welcome Back to the Champions League. Please Maintain Social Distance.

Feels like dictatorship: East Bengal on AIFF’s decision to call of I-league season

How Hot is Too Hot?