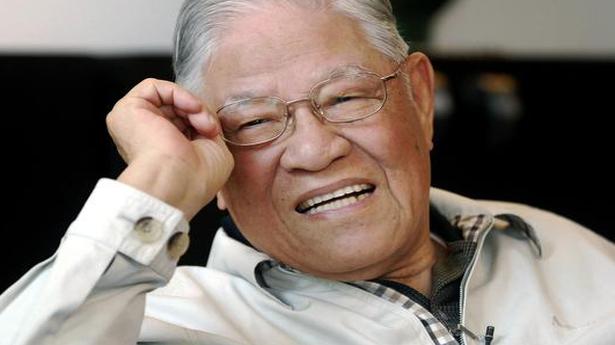 Lee became Taiwan’s first democratically elected president in 1996, in a landslide victory that followed eight months of intimidating war games and missile tests by China in waters around Taiwan in an attempt to scare voters.

He thrived on defying China’s drive to absorb the island it regards as a wayward province and hoped for Taiwan to be “a country of democracy, freedom, human rights and dignity.”

Lee was dubbed “Mr. Democracy” for burying autocratic rule in favour of freewheeling pluralism, and thrived on defying China’s drive to absorb an island it regards as a wayward province.

Lee hoped for Taiwan to be “a country of democracy, freedom, human rights and dignity, where one does not have to be ruled by others and where everyone can say out loud ‘I’m Taiwanese’,” he told a 2012 election rally.

Lee’s greatest act of defiance was becoming Taiwan’s first democratically elected president in March 1996, achieved with a landslide following eight months of intimidating war games and missile tests by China in waters around the island.

Those events brought China and Taiwan to the verge of conflict, prompting the United States to send a carrier task force to the area in a warning to the Beijing government.

Inaugurated that year, Lee offered to make a “journey of peace” to mainland China.

But Beijing branded him a “splittist” bent on turning Taiwan’s self-governance into fully fledged independence, and said he should be tossed into the “dustbin of history”.

The government of Taiwan, formally the Republic of China, was established in 1949 by Chiang Kai-shek, after his Nationalist forces lost control of the mainland to Mao Zedong’s Communists and fled to the island, which lies some 180 km (112 miles) across the Taiwan Strait off China’s southeast coast.

The first president born on the island, Lee’s tough language towards mainland China resonated with Taiwan’s 23 million people. He once described Taiwan-China ties as a “special state-to-state relationship”, infuriating Beijing. He also sought to snap cultural links in favour of a distinct Taiwanese identity.

Some in the party blamed Lee for the defeat, saying his decision not to back its favoured candidate, James Soong, led Soong to stand as an independent and split the vote. His subsequent public support for pro-independence party candidates led to the Nationalist party expelling him in 2001.

He was indicted in 2011 on charges of corruption during his time in office – a move his allies said was aimed at discrediting a pro-independence party he supported in the run-up to the 2012 presidential election. He was later found not guilty.

Lee was born on Jan. 15, 1923, in a village in northern Taiwan where his family owned a small rice and tea farm.

His education under Japanese colonial rule before 1945 drew him to Japan’s culture and he was a fluent Japanese speaker. He briefly served in the imperial Japanese army, staying on after its World War Two surrender to study at university in Kyoto.

He later studied at the elite National Taiwan University and in the United States at the universities of Iowa State and Cornell, where he earned a doctorate in agricultural economics.

His June 1995 trip to a Cornell reunion angered Beijing into briefly downgrading ties with Washington and freezing what had been warming semi-official talks with Taipei.

Lee was a Presbyterian, and an accomplished violinist, golfer and Chinese chess player. He married childhood friend Tseng Wen-hui and had two daughters and a son, who died of cancer in 1982.

Take Me Out to the (Backyard) Ball Game

everything you need to know

Summer squash reaches its peak in the air fryer