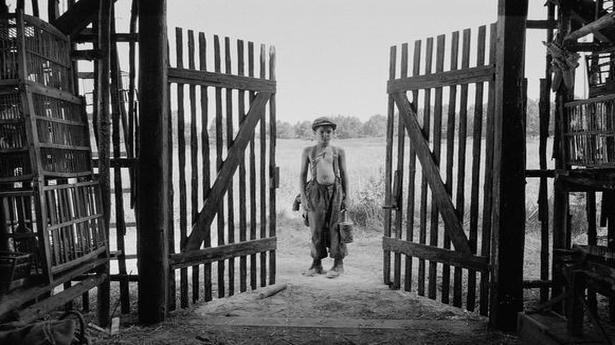 (This review contains spoilers and some graphic details)

In Ivan’s Childhood, master filmmaker Andrei Tarkovsky’s seminal début feature, we see an illuminating image of a boy playing by the beach and sunlight, being traumatised by the memories of his mother in a dream, in what could be one of the greatest opening sequences in cinema history. We see the boy waking up to his immediate reality: he is a spy for the Soviet army, who is caught at the crossroads of Second World War. We also see Andrei Tarkovsky pawning off the boy’s innocence, in exchange for a larger commentary on “his hatred for war”, as he said in one of the interviews.

If the boy from Ivan’s Childhood had not been picked up by the Russian troops and had wandered around the farmlands of Eastern Europe instead, in search of home and livelihood while stumbling upon a myriad characters who are human incarnations of death and torture, it would have been a different journey and would look somewhat like The Painted Bird. In his third feature, Russian filmmaker Vaclav Marhoul looks at the world through the prism of an unnamed protagonist simply called The Boy (a fantastic Petr Kotlar), exploring the trickery corners of the human mind, bringing about the much-need pessimistic look at the barbarity of life. There are limited dialogues and the movie communicates through the eyes of the boy, who, for the most part, remains a mute spectator, as Marhoul peels off his skin, layer by layer, and feeds them to vultures encircling him.

In the opening sequence, we see The Boy clutching a mongrel and running for its safety from a group of mischievous boys who eventually catch up; thrash him and set the animal ablaze. Later, when the boy arrives home with a broken tooth, following his nasty encounter, the aunt, with whom he lives in an undisclosed location, casually remarks: “You shouldn’t go out on your own.”

What stuck out like a sore thumb, having sat through The Painted Bird, is this portion whose psychological cognizance, in the overall positioning of the movie, sends shudders — if you consider the possibility of what could have happened to The Boy, had his aunt lived and had he not been left to survive on leftover breadcrumbs, in no man’s land.

The aunt’s seemingly-casual line and the boy’s fairly ordinary life, are the only remnant we hark back to in this three-hour long movie.

Based on Jerry Kosinski’s novel, The Painted Bird — set against the backdrop of Second World War — has the narrative structure of a ballad: about The Boy’s (mis)adventures as he trudges his way through villages, farmlands; encountering peasants, soldiers, a wife-beater and a paedophile, who inflict pain and torture on him, in the most gruesome fashion. Death, destruction and mayhem follow him like a shadow wherever he goes — “He’ll only bring misfortune. He has dog’s blood,” says a character, while another one pronounces him ‘Demon’, in a boy’s form.

Every character he comes across either tries to take possession or treats him like a piece of meat, and he becomes a witness to some of the stomach-churning horrors. Like Miller who gouges out the eyes of a young man for exchanging looks with his wife. Or the peasant who sells him as a “Jew” to the Nazi men. Or the sex-deprived woman in whose house he takes comfort.

But the characters we meet aren’t entirely evil, after all. Take Lekh (Lech Dyblik), for instance. He is a bird collector and the one among four characters who treats him gently. There is a wonderful stretch where Lekh takes a bird out from its cage, on the pretext of releasing it from bondage, as he paints and feeds it to other birds. The scene cuts to a swarm of birds preying on the little one: an allegory on the boy whose life is simply poached and preyed on by opportunists.

There is also a romantic urgency to invoke Biblical implications throughout — “Jesus Christ was subject to inequity, just like you,” says a pastor, who rescues the boy from being butchered on the streets by Nazi men, and inadvertently, sends him to live with a paedophile. Some of these bits are extremely disturbing, causing a palpable discomfort.

The boy, unlike Christ, is too young to bear the weight of the cross. Even the characters (we are introduced to at least 10) seem to have been designed after the Ten Commandments.

Beneath the allegories, subtexts and a cold-blooded treatment, you get a sense of familiarity in the manner in which Marhoul deposits his protagonist in the wrong place at the wrong time. Like the time when he is rescued by Labina (Julia Vidrnakova), in whose house he discovers the complexity of sex and sexuality. There too, he is subject to sexual crimes and psychological torture. On his first day, he glares at Labina, almost inattentively, as she satisfies her lustful urge from a dying man. Later, in the film’s cruellest scene, the boy makes an approach towards her while she is asleep, but puts his boyish temptations to rest. It is, perhaps for the first time, we see him expressing his feelings. She could have been a mother he longed for, or a sister. Or just Labina, the woman to whom he was attracted.

Marhoul’s The Painted Bird is no less than a work of an auteur; it has the visual symbolism and a pessimistic gaze you would find in a Ingmar Bergman film; the poetic use of landscape of a David Lean film; and more importantly, the lyrical sensory of an Andrei Tarkovsky film. Marhoul may have given a closure to his film — “Do you even remember your name?” asks The Boy’s father when they finally leave for home, on a bus.

As he gently scribbles his name on the window, we realise the movie has barely began.

On Dental Hygiene and Oral Health: Tips for Parents

Many Museums Won’t Survive the Virus. How Do You Close One Down?

Amazon To Shut France Centres For 5 Days Over Coronavirus

‘Spotlight on Plays’ Adds Four Readings of Work by Women