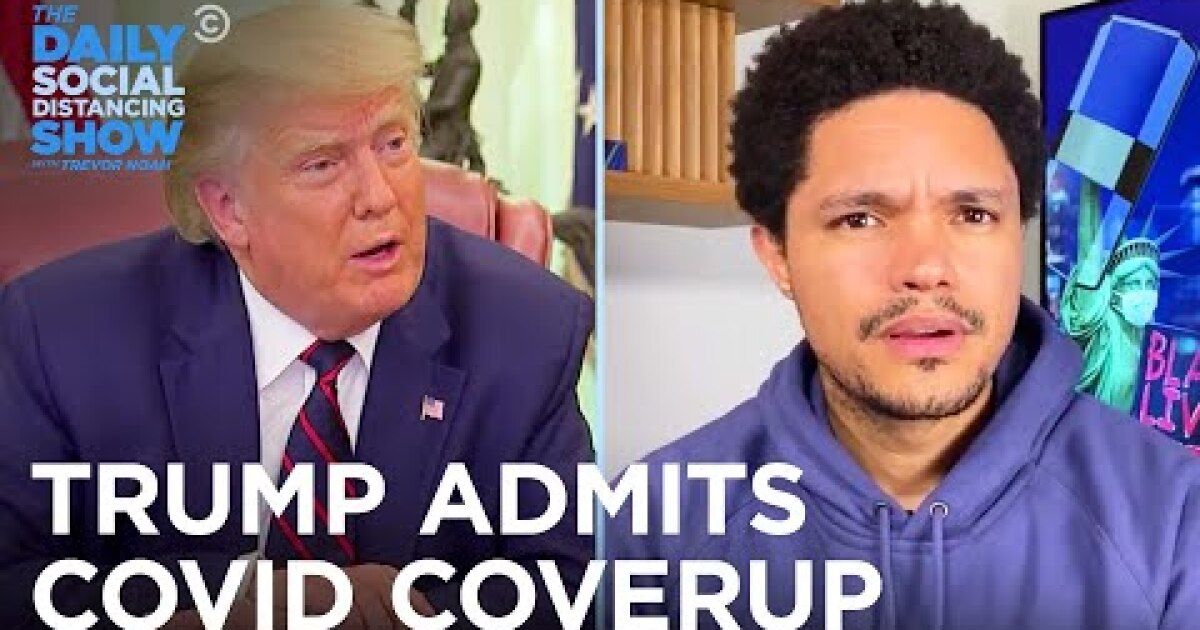 Trevor Noah has heard the tape of President Trump admitting that he deliberately downplayed the dangers of COVID-19, and the late-night TV host is not pleased — or surprised.

Wednesday’s episode of “The Daily Show” aired hours after new audio of Trump telling investigative journalist Bob Woodward he “wanted to always play [COVID-19] down” was released ahead of “Rage,” Woodward’s forthcoming book about the president.

“You might remember, back in February and March, Donald Trump was very confidently saying that the coronavirus was not a big deal, and it was basically just like the flu,” Noah said. “But since then, we’ve all learned that that was b—. Well, today it’s come out that Trump privately knew that it was b—.”

In the audio from a March 19 interview with Woodward, Trump added that he was “still … playing it down, because I don’t want to create a panic.” Approximately 190,000 Americans have now died of the respiratory illness.

“You didn’t want to create a panic?” Noah repeated on Wednesday. “So what did you want? For people to very calmly be dying in the streets? … I get that as a leader you don’t want people to panic. But you also want to inform the people so they can be safe. If a plane is crashing, a pilot will tell you to remain calm, but they’ll also tell you to fasten your seat belt and brace for impact. …

“And it’s really confusing, because at first I thought Trump was too stupid to understand what was going on with the virus. But it turns out that he was actually smart about it in private, but he’s also stupid enough to tell Bob Woodward on tape. Hmm. Now I don’t know what to think.”

Noah also sounded off on Woodward, who has been criticized for sitting on his interviews with Trump until the arrival of his book. The veteran reporter has since defended his decision to withhold the tape, telling the Associated Press he first wanted to find out “What did he know and when did he know it?” and that his goal was to publish before the election in November.

“Am I the only one who thinks it’s crazy that people keep releasing books where they reveal that they’ve learned the most incriminating things about Trump, but they only tell us about it now?” Noah said. “Imagine if Paul Revere had this attitude. ‘Are the British coming? Find out by preordering my book on Amazon!’”

In another audio clip, when asked by Woodward if he believes racism is here in the United States “in a way that it has an impact on people’s lives,” Trump replies, “I think it is. And it’s unfortunate. But I think it is.”

“Whoa, somebody finally got around to watching ‘Get Out,’” Noah quipped. “It really is interesting how private Trump seems to know a lot more than public Trump. I mean, this whole time, I thought there were going to be secret tapes of Trump saying the N-word. Instead, we got secret tapes of him being an epidemiologist with a PhD in critical race theory. … It shows you that Donald Trump is willfully misleading the public. It reminds you that he’s a con man.”

Soccer Needs to Break This Link

Worried About Social Distancing When Traveling? Join the Crowd and Rent an R.V.

Uber, Lyft hit with claims of more than $630 million in back wages

What Ruth Bader Ginsburg’s Death Could Mean For The Obamacare Hearing Nov. 10