As a piano tuner, Verne Edquist spent his career tweaking the infinitely complicated mechanical actions under the lids of pianos in Toronto, pricking hammers with needles to give the sound different characteristics and adjusting tiny parts with names most pianists do not know — wippens, agraffes, knuckles and backchecks.

He prepared the pianos for well-known musicians, among them Gina Bachauer, Victor Borge, Duke Ellington, Arthur Rubinstein, Andras Schiff, Rudolf Serkin and Liberace. But he was chiefly known as the personal tuner for the famously eccentric virtuoso Glenn Gould, whose pianos Mr. Edquist nurtured from the 1960s to the early ’80s, making exacting adjustments that shaped the sounds heard on Gould’s recordings.

Mr. Edquist died on Aug. 27 in Toronto. He was 89. His son Carl said the cause was kidney failure.

Tuning pianos is a subtle art, but there was nothing subtle about how he became Gould’s tuner. The first time they encountered each other, he flatly refused to work on Gould’s piano.

It was a Chickering, an 1895 grand whose featherweight action set the standard for pianos in Gould’s mind and under his fingers. Leonard Bernstein said, after stopping in to see Gould when the New York Philharmonic toured Canada in the 1960s, that it sounded “rather like a fortepiano, or as much like a harpsichord as possible.”

But it did not adjust well when Gould moved it from his family’s cottage on Lake Simcoe, about 55 miles from Toronto, to his apartment in the city. Gould called the piano department at the T. Eaton Company Limited, a department store that was Steinway’s dealer in Canada at the time. As a favor to Gould, who was famous for his exuberant 1955 recording of Bach’s “Goldberg” Variations, Eaton sent Mr. Edquist right over. Mr. Edquist had been on Eaton’s staff of tuners for only a year.

The piano “was a disaster,” Mr. Edquist recalled in a 2014 oral history interview. Its problems went beyond being badly out of tune.

“All Gould wanted,” Katie Hafner, the author of “A Romance on Three Legs: Glenn Gould’s Obsessive Quest for the Perfect Piano” (2008), wrote in a tribute to Mr. Edquist, “was for the tuner to do what had been done hundreds of times before: get the piano into playable condition, if only for the time being. But Verne refused, telling Gould that the tuning pins were so loose they needed to be replaced. Verne’s stubborn insistence on doing things his way endeared him to Gould.”

Some months later, the Chickering was hauled into Eaton’s and larger pins were installed, just as Mr. Edquist had advised.

Gould later enlisted Mr. Edquist to be his private tuner and ready Gould’s preferred Steinway for recording sessions. That battered piano — referred to as CD-318, its number in Steinway’s fleet of concert pianos — had been sidelined at Eaton’s until Gould tried it.

Gould “was delighted to discover that Edquist was as impressed by it as he was,” Ms. Hafner wrote. Mr. Edquist’s work ultimately made CD-318 feel more like the Chickering.

Mr. Edquist became an essential part of the small team at Gould’s late-night recording sessions in the Eaton auditorium, touching up CD-318 while Gould was in the control room listening to playbacks of the piece he had just recorded. The schedule energized Gould but exhausted Mr. Edquist, who said he did push-ups to stay awake until Gould told him to stop.

“Verne was clearly very well aware of his unique skills and his ability to achieve what many other technicians could not, to hear at the earliest possible moment when an instrument was drifting, when it was no longer creating that harmonic aura,” said Brian Levine, the executive director of the Glenn Gould Foundation. “He’d be there like Johnny on the spot.”

Still, Gould could be stingy with praise. “Verne took it like a trooper,” Mr. Levine said in a phone interview. “He understood the star attraction was not him.”

Charles Verne Edquist was born on Jan. 10, 1931, in Fairy Glen, Saskatchewan, a farming community about 310 miles from the United States border. His father, Carl Ferdinand, known as Charley, was a Swedish immigrant who was deported back to Sweden when Verne was a small boy. His mother, Thea (Staaf) Edquist, worked as a housekeeper.

Mr. Edquist was born with congenital cataracts; an operation improved his sight but still left it impaired. He was sent to the Ontario School for the Blind in Brantford, where, bedridden with scarlet fever as a 13-year-old, he was intrigued by a sound that drifted through the infirmary windows — the sound of a piano being tuned. He signed up for tuning classes when he was well again.

He moved to Toronto when he graduated and found a job in a piano factory, tuning freshly strung instruments. He also began attending a Lutheran church, where he met and married another parishioner, Lillian Lilholt. She died on Sept. 20. Besides their son Carl, they are survived by a daughter, Marilyn Trenbeth; two other sons, Eric and Graham; nine grandchildren; and six great-grandchildren.

CD-318’s days as Gould’s preferred piano were numbered after it was dropped on its way back from a recording session in Cleveland in 1971. In time Gould began playing Yamahas, which had their own tuners, and so stopped calling Mr. Edquist, who was not fond of the brand and whose ears were sharp enough to recognize its particular sound, even over the phone.

“One day, I was talking to Verne on the phone,” Ms. Hafner said, “and he hears my daughter in the background, playing, and he says, ‘Katie, why do you have a Yamaha?’ Which I did, because I loved it. I couldn’t hear the difference between a Yamaha and a Steinway, but Verne could.”

‘Thanks for Flying SpaceX’: NASA Astronauts Safely Splash Down After Journey From Orbit

How to Travel Abroad to Work From Home

How to Quit Smoking and Vaping During the Coronavirus Pandemic

Power of Sun Is Seen as Slowing the Coronavirus 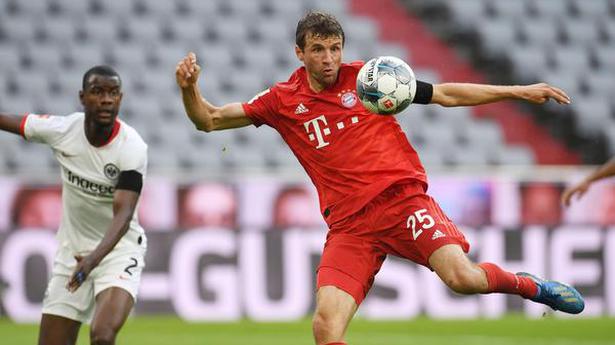 Amazon Pay Unit Gets Rs. 700 Crores From Parent Ahead of Festive Season

Where Has Seal Been? Watching Your Instagram Stories (and ‘Plandemic’)

2020 Presidential Debate Calendar: What You Need to Know