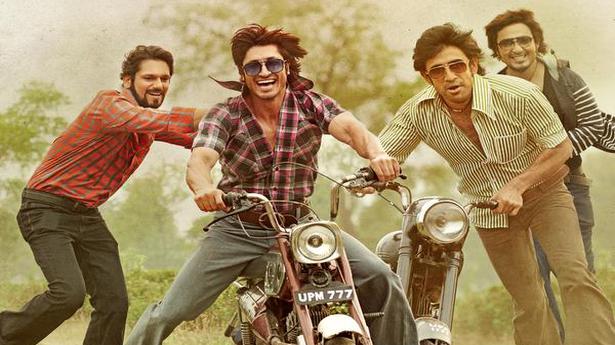 Yaara is a weird watch. It is cut for a viewer who already has an above average idea of what happens in gangster films; such is the urgency to keep pushing the plot forward that there is little in terms of explanation.

It is also a ‘period film’ that struggles to establish the time element in its geography and dialogues.

The story is pedestrian. It follows four friends: Phagun (Vidyut Jammwal), Mitwa (Amith Sadh), Rizwaan (Vijay Verma) and Bahadur (Kenny Basumatary) — collectively referred to as the ‘Chaukdi gang’. They smuggle, loot and kill their way up the notoriety ladder. Along the way, there are a handful of shirtless sequences.

Midway through this journey, a fifth member joins their team: Fakira (Ankur Vikal). Then we see Naxalism run rife in college campuses and the hinterlands; we also see Sukanya (Shruti Haasan, in a hard-to-fathom role of a student committed to Maoist principles), there is a love song, more bang-bang (the ones that involve bullets), a couple more shirtless sequences and a betrayal that lands all except one in jail.

Fast forward several years: Phagun is a rich businessman and is having the time of his life when he learns that Mitwa is caught by the CBI in an operation where a group of agents pick up Mitwa (who, mind you, is now an international smuggler) like he was a bag of veggies at the neighbourhood grocery store.

Anyway, now the gang has to reunite, and what happens next (there are a few audacious sequences) forms the rest of the story. There is a final twist to the plot as well, and if your attention has not dithered by that time, then perhaps it is worth checking out.

Yaara is anything but a story on friendship. Sure, the friends stick together. It espouses the proverb — a friend in need is a friend indeed. However, as a viewer, the Chaukdi gang’s ‘friendship’ never leaves an impact on you because of the ‘macho’ responsibilities placed on the gang by its unbelievable plot. These four men are at the same time rascals of the highest order (they are shown looting from working class merchants in a montage) but are also Robinhoods to a group of villagers suffering due to a landlord.

What Yaara could have been instead is a spoof film; the screenplay would have been more believable. Although it is worth tipping your hat to cinematographer Rishi Punjabi for excellent visuals: the lighting and framing used in certain sequences are worthy of a portrait.

Back to the story line, the commentary around Maoism is interesting; it offers a partial critique of woke liberalism. But lost in the melee is a gripping screenplay required in a film about gangsters and a sensible plot that makes it worth sitting through the film’s two hour 10 minutes runtime.

Yaara is streaming on Zee5 Anderson Cooper announces the birth of his son, Wyatt

It will be a stroll down memory lane, not Magnolia Lane, for Jim Nantz this Masters weekend

Teachers Are Wary of Returning to Class, and Online Instruction Too