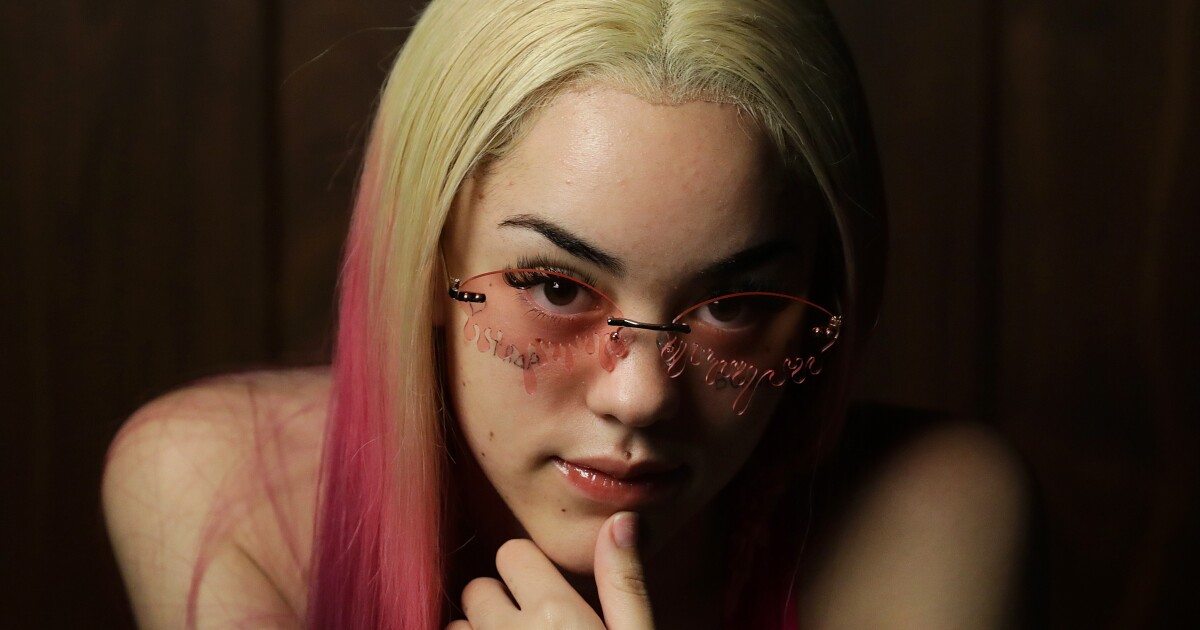 The ink was barely dry on ppcocaine’s half-dozen new face tattoos this week when she walked into a session at Westlake Studios in West Hollywood, in the room where Michael Jackson recorded “Thriller.” In a monochrome pink leotard, with matching dyed hair and sunglasses, the biracial 19-year-old L.A. rapper and ace provocateur of lesbian TikTok walked a Times reporter through the brand-new work across her ears and eyes.

Ppcocaine’s quarantine-era ascent through hip-hop has been so rapid that she had to get her genre’s now-prerequisite face tattoos practically all at once. With just five deliriously crass and catchy solo singles — all recorded no earlier than December — ppcocaine (pronounced “p-p-cocaine,” though she goes by “cocaine” in conversation) has already made a huge impact on the popular social-media platform that drives much of the Hot 100. She can count well over 1 million TikTok followers and some of the biggest stars on the platform, including Charli D’Amelio and Addison Rae, as fans.

She’s worked up an aesthetic of stylized hyper-femininity in her fashions and flow, paired with lyrics so over-the-top sexual that they make “WAP” read like “The Notebook.” Take “3 Musketeers,” one of her more quotable-in-a-family-newspaper singles, with its hook “Ayyy, tell lil shorty come here / I’m tryna blow her back out, walkin’ funny for the year.” It has over 20 million streams on Spotify.

“Like, yes, I get my music is not for everybody, but bitch, keep your opinion to yourself,” she said, about anyone taken aback by her style.

Ppcocaine is part of a recent wave of animated, sexually assertive female rappers, including Megan Thee Stallion, Cardi B, Flo Milli, Rico Nasty and City Girls, who have edged into a hip-hop scene typically ruled by despairing, often nihilistic young men. Columbia Records just signed her, but she still updates her R-rated OnlyFans page from the West Hollywood house where she quarantines with her producer and rotating pals on the couch, with little to do but record tracks in her bedroom, order takeout from her favorite crab-boil restaurant and stir the pot with her million followers.

“I remember as a kid, I hated school, but I wanted to go to school so bad so I didn’t have to be at home,” she said. “I ain’t got s— to do either. I know that [my fans] have probably locked in themselves in their room, being on their phone all day, and it can get depressing. And it’s like, I want people to know that they’re not alone.”

Born to a Black African father and a white mother, she bounced between her parents’ and grandparents’ homes in super-white Santa Clarita and a rougher-hewn Valley where she felt constantly torn between cultures — or the lack of one.

“If I ever see someone from Santa Clarita popping off or like acting like they’re big and bad, I laugh because Santa Clarita is nothing, bro,” she said. “I went to a predominantly white school, so I had girls asking me, ‘How does your hair grow six inches overnight?’ Like, are you stupid?” she laughed, gesturing at her wig. “How many times do I have to say I’m Black?”

Coming out as gay wasn’t too much of a struggle, relatively. “My grandparents kept telling me boys to marry and stuff. I’m like, ‘I’m 12.’ But now they’re OK with it,” she said. Ballet and dance classes gave her an outlet for her performative streak, but high school in L.A. battle-hardened her for the trials of very modern music fame.

“People hate me, and it’s like nothing,” she said, laughing. “I’m used to people hating me. I hated myself. This new hate is nothing.”

After school, she worked a stint as a dancer at an L.A. strip club, and first rapped under the name trapbunniebubbles (which is more or less tattooed under her eye sockets now). But she figured out the character of ppcocaine after a night — as she’s described it on Instagram Live — “during a very bad time of my life. I was doing a lot of drugs, and I was very unhealthy. I’m clean now.”

Her lyrics, however, are almost competitively filthy. “DDLG,” short for “Daddy Dom / Little Girl,” feels ripped from an episode of “Law & Order: SVU” about the trouble teens can get into online. (“Petition for @benshapiro to listen to DDLG by ppcocaine,” one fan wrote to the right-wing commentator, who was quite disturbed by “WAP.”)

But ppcocaine sells her tracks like “Pj” with such punky verve and ad-libbed agility that it’s hard not to root for anyone using them to terrorize their parents during quarantine.

“She’s the fastest-working artist, and she’s getting better all the time,” said her producer and roommate Spain, who had cut beats in the Soundcloud scene before devoting himself to the ppcocaine project. “She can read people’s energy.”

Hip-hop and TikTok have a symbiotic but uncertain relationship. For every act like Roddy Ricch or Lil Nas X that uses the platform to help them vault into stable, artistically rewarding careers, countless more flicker and vanish in the digital ether.

Ppcocaine is rightfully wary of being lashed too tightly to the platform. She made her early fan base in the circles of the young lesbian and queer content creators online there. But she doesn’t hang out at the famed L.A. content houses, and doesn’t personally know any of the influencers who helped launch her stardom. “I’m more of an artist that uses TikTok, not a TikToker made into an artist,” she said. “That drama’s really not something that I’m trying to surround myself with.”

Columbia Records clearly thinks there’s long-term potential here — her A&R representative at the label, Juba Lee, helped turn Diplo into a pop star. While these singles are some of the first tracks ppcocaine has ever recorded, she has a madcap, giddy delivery and charisma that could eventually yield a single like Doja Cat’s No. 1 “Say So,” even if ppcocaine rolled her eyes a bit when a Times reporter made that very obvious reference point for her sound.

Her debut album for Columbia is a long way off yet, though she and Spain write new music every day, and she has a new professionally filmed video for “3 Musketeers” out next week. Without touring or in-person appearances, ppcocaine will for now have to live where she started her rap career — online at home in sweltering L.A., albeit now able to drive loops in the new Tesla she bought herself as a treat for signing her major-label deal.

Even the biggest stars are struggling to keep fans’ attention during COVID-19. But whatever fame has turned into today, ppcocaine has it. She just has to keep it long enough for everyone to get outside again.

Steve Coogan Reaches the End of ‘The Trip’

‘All Adults Here,’ by Emma Straub: An Excerpt

We Know Little About David Silva. That’s How He Wanted It.